AUSTIN PSYCH FEST, May 1-4, Carson Creek Ranch Thursday, May 1 You just can't pass up a chance to see the Flamin'. 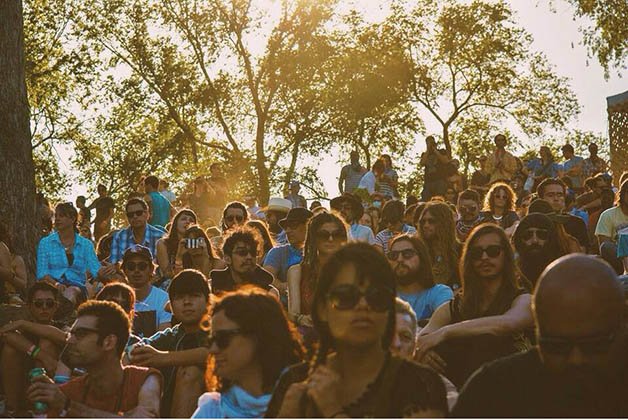 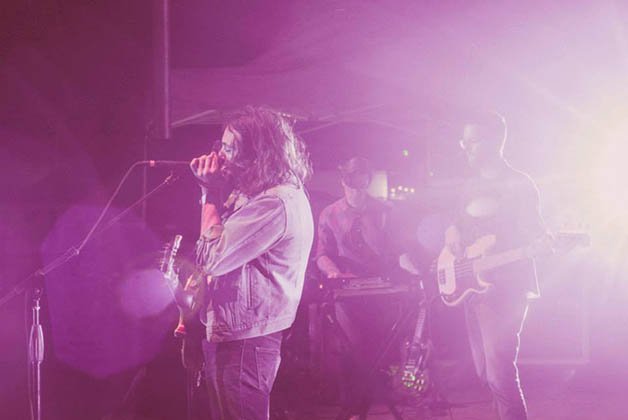 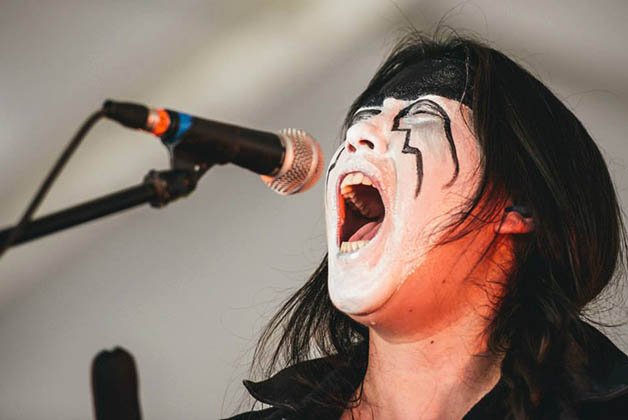 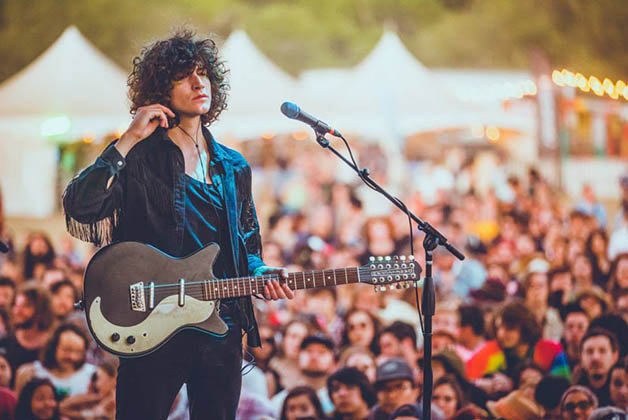 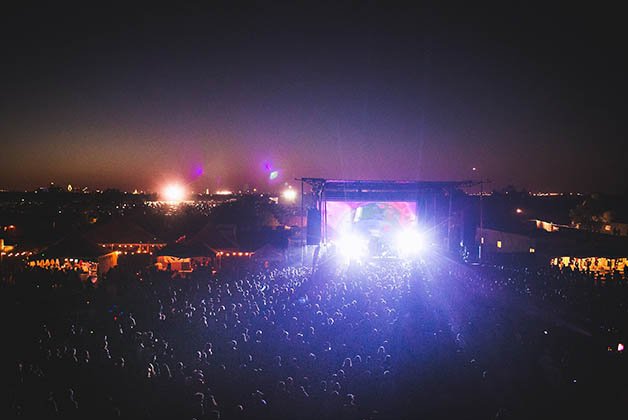 You just can’t pass up a chance to see the Flamin’ Groovies, even if your plane gets in late, darkness has long descended and the lineups for wristband pickup and for the Austin Psych Fest kickoff shows snake down East 7th Street downtown. But I obtained my press pass with zero hassles, and it helped me move to the front of the line at Red 7, where bands were playing both inside – including Cleveland’s New Planet Trampoline doing Pink Floyd’s The Piper At The Gates Of Dawn from front to back, because that’s the kind of festival this is – and outside, where the Groovies delivered a surprisingly raucous set of their 60s/70s cult gems – Slow Death, Shake Some Action, both saved for the end – and deep-cut covers like Freddy Cannon’s Tallahassee Lassie and NRBQ’s I Want You Bad, which almost made me lose my mind.

The actual fest took place on three stages at the very dusty Carson Creek Ranch, out near the airport. I showed up in time for Graveyard‘s 7 pm set on the Reverberation Stage at the centre of the ranch, surrounded by food trucks, beer tents and vendors hawking merch and vintage clothes. The Swedish rockers and their towering Orange amps were in fine form, with singer/guitarist Joakim Nilsson‘s vocals less upfront in the mix than on record, which worked better for me. The four-piece expertly moved from soft doom grooves to throbbing heaviosity, building toward big moments as subtly as possible. Endless Night from 2012’s Lights Out got, well, lighters out and raised – a cool moment set against the rising moon.

Black Lips brought out a faction of younger cowboy dudes with American flags braided into their meagre mohawks and a desire to mosh. Aside from the insane strobe lights, the Atlanta herky-jerky garage-punkers were probably the least psychedelic act to grace the festival stages, but they delivered on their reputation for high-energy performances, jumping and flailing pretty much non-stop in front of a massive crowd. Was it messy? Yeah. “It’s rock and roll! It’s not supposed to be perfect,” yelled a member. (It was too chaotic onstage to tell who.) Their Southern-tinged new album hasn’t won me over, but the performance still entranced me enough that I missed Kadavar‘s 9 pm set in the Levitation Tent, a fact that haunted me throughout the weekend – at least 15 people told me the Berlin band was the festival highlight thanks to their mind-melding mix of Hawkwind psych and Pentagram doom.

The Zombies were pure bliss, though, especially if you were raised on classic rock radio. Colin Blunstone still soars as a singer, and his stage demeanour is both reserved and epic, arms raised out to his sides for the big moments, quietly noble for the rest. Keyboardist/songwriter Rod Argent stole the show with his fast-paced finger work and mini history lessons between songs. He didn’t shy away from noting the British Invasion band’s musical legacy. (“This song was covered by Tom Petty.” “And this one by Brenda Holloway.” “This one appeared on Mad Men.” “Dave Grohl loves this one.” “Here’s a mini set of songs from Odessey And Oracle, which made Rolling Stone’s 500 Greatest Albums of All Time list.” Etc.) It’s hard to knock him. Few things beat singing along to This Will Be Our Year and Time Of The Season on a warm night in the middle of a field with a bunch of friendly strangers in badass fringe vests.

Shuttles going between the airport hotels and ranch (and also between the ranch and downtown) were hugely appreciated, especially at just $5 a pop, but the schedule seemed completely random, sometimes leaving you waiting on the sidewalk in 32 degree C heat or in the dusty ranch parking lot at 3 am for up to an hour. In order to ensure that I caught Yamantaka//Sonic Titan‘s 2:30 pm set at the Levitation Tent, I left extra early, hitched a ride with an employee from my hotel, and showed up with time to kill. Turned out to be a good thing as every band on that stage started 15 to 30 minutes early (which also, sadly, caused me to miss Destruction Unit later in the day. When do festivals ever run early?).

The crowd was medium-sized and seemingly unfamiliar with the Toronto/Montreal operatic pop/metal/doom five-piece. But between Ruby Kato-Attwood‘s high, gorgeously melodic singing, Ange Loft‘s deeper chanting and aggressive percussion-shaking, Brendan Swanson‘s thunderous keyboard lines and the black-white-red face paint, the arresting band definitely won people over. They stuck with tunes from their recent UZU album, and constantly shifting, up-tempo numbers like Hall Of Mirrors and One went over best. Then it was over to the Reverberation Stage for Steve Gunn, a modest figure in a T-shirt and jeans whose hypnotic acoustic and electric guitar stylings and mellow melodies captivated the small crowd into silence (or maybe it was the blazing sun’s fault). Last year’s Time Off was won of my favourites of 2013. Take a listen if you haven’t already.

The most beautiful stage was the Elevation Amphitheatre, set in front of the Colorado River with a forest range in behind. At night, the fest illuminated the wall of trees with kaleidoscopic projections. The crowd sat on a hillside looking down onto it, the perfect place to take in Jacco Gardner‘s shimmering psych pop. Gardner, from the Netherlands, is a youthful, playful singer/multi-instrumentalist who gives off majorly good vibes. Mellotron lines imbued the songs with woozy warmth, and a seriously groovin’ bassist kept the momentum surging. Bombino over on the Reverberation Stage was the perfect follow-up, working that same light-hearted spirit but from a Nigerian perspective. He keeps his guitar tone clean, his smile wide, and dances all over the fret board without ever sounding busy. It’s meditative stuff, enhanced by tapping high-hats, percussive rhythm guitar, featherweight vocals and soft bass (the bassist wears black gloves and uses fluorescent pink strings and the most insanely shaped bass in existence).

The transition into fashion-forward (actually, “backward.” Waaaay backward) Temples from England was at first jarring, but soon dusk fell and the slick neo-psychy Beatles-obsessed Brits showed that they’ve got the songs to back up the Marc Bolanesque image. There isn’t a stinker on their February 2014 debut album, Sun Structures, and, live, the songs took on a heavier, thicker, completely satisfying rock ‘n’ roll edge. Back down at the Elevation Amphitheatre, Japan’s Acid Mothers Temple upped the weird factor with super-noisy Theremin experiments, loud guitars and nutty synths. Kind of a dirty take on experimental prog rock, seemingly mostly improvised, and led by guitarist Kawabata Makoto. A bit much after a long day in the sun and too many beers, though sitting down on the hay-covered hillside for an hour was just what I needed.

The final night of Psych Fest was stacked with all of the bands I was most excited to see. Mikal Cronin played a positively buoyant dinnertime set that got the crowd bopping and smiling. Fans of Matthew Sweet will love his breezy pop-radio melodies, but maybe because he was at Psych Fest, the Californian singer/songwriter loosened up tunes from his last two albums (predominantly MCII), turned up the effects pedals and let his lead guitarist go completely shred-crazy. Partway through, he and his band sang Happy Birthday to his friend Shannon, who came onstage and smushed a cupcake into the guitarist’s face.

But having to decide between Earthless, the War on Drugs and Pink Mountaintops, who all played at pretty much the same time, was heart-wrenching. Philly’s War on Drugs started first, so I grabbed a sweet spot close to the stage and took in half of their set, which was almost song-for-song the same one I caught a few weeks ago at the Horseshoe, making the heartbreak less painful. Adam Granduciel and company added a pedal steel guitarist for this show, and the airplanes soaring low overhead gave the whole thing an epic quality. Then someone got bubbles going… It was hard to leave.

But dashing over to the Levitation Tent to catch Earthless was definitely the right decision. Talk about heavy. Sprawling Krautrock-touched instrumental tonnage by three dudes from San Diego. The huge crowd was losing its shit. The show quickly grabbed the top spot of the fest for me, even though I scrambled down to the Elevation Amphitheatre partway through in order to catch a few songs from Pink Mountaintops, playing tunes from their just-released Get Back album. Stephen McBean and band sounded solid, and he, like so many other fest performers, were quick to applaud APF for being so awesome. But the songs had a lazy torpor to them in relation to Earthless’s pummelling, surging psych, so I ran back to catch one final song (which was actually quite a lot these guys write looooong songs).

My heart was full. Texans are some of the friendliest people you’ll ever meet, and the seventh annual Austin Psych Fest one of the best times I’ve ever had. The shuttle took a while to arrive, but who really cared? Certainly not the passengers near me at the back, with myriad accents and dust lining our cowboy boots and jean jackets. They broke into a drunken rendition of Biz Markie’s Just A Friend, as the shuttle barrelled down the dirt roads. Random, but somehow also just right.