Q&A with the director of Austra's new NSFW music video 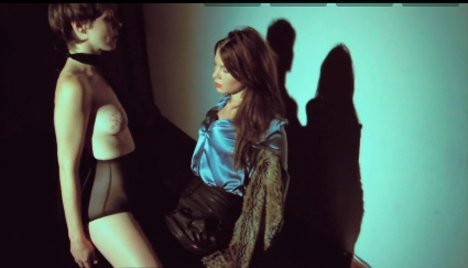 Katie Stelmanis has been getting a lot of attention as of late.

She is on the brink of releasing her new full length album Feel It Break under the recently unveiled moniker, Austra, and recently paired up with local up and coming director Claire Edmonson to make the video for her pre-album single The Beat & the Pulse.

The creepy little number features a group of your model-like beauties as you might find them in a spread of a pricey fashion magazine, but upon further inspection these ladies are revealed as quite unique, indeed. Watch the video to see what we mean (and be warned, there is some nudity). I talked with Claire Edmonson, about how the project came about, as well as her experiences transitioning from fashion stylist to video director.

Did Katie Stelmanis come up with the video concept, or did you propose the whole thing to her?

Katie sent me the song out of the blue in the summer, after I worked with John O’Regan (Diamond Rings). She approached me to make the video and I was pretty excited because the song is so great. We started sending each other visual references and ideas about what inspires us, and we were pretty much on the same page with what we liked from the start.

The video has a very “fashion editorial gone wrong” feeling to it. How would you explain these elements of the video – was this inspired by any of your other professional work, and how?

I have a background in fashion – I have worked in design and as a stylist for a lot of bands in the UK and in Toronto. It was fun for a while, and I do love clothing and dressing myself as a form of self expression, but I just can’t bring myself to care what anyone else wears anymore. I think incorporating a cohesive styling aesthetic into film making whenever it could be relevant is my way of reconciling this: make fashion an element of my creative output, instead of it being my sole creative output. I love that you just called it editorial gone wrong. I was always trying to make any editorials I worked on “go wrong”, usually to the confusion of the photographer.

The Beat & the Pulse video has a lot less going on than your last video with Diamond Rings – did you want to do things differently for this video, and why?

I think the Diamond Rings video surprised a lot of people who know me because I usually veer to a darker aesthetic and this was just outright pop/camp madness. But I needed to have some fun and find the humour in work again, and that Show Me Your Stuff video really satisfied that need.

And again, I think that video was a way of channelling my love of fashion and pop culture into a more satisfying outlet.

The Beat and the Pulse video is aesthetically and idea-wise is closer to what I am naturally drawn to, but I’ve realized both avenues are important to my sanity.

The video features many local babes recognizable to Toronto about-town types – how did you go about casting these wonderful ladies?

Katie did most of the casting for us. She sent out the call to the community and we got a lot of love back. She is friends with all the amazing dancers in the video who showed up for it. We had a tiny, tiny budget for this video and paying people was not an option, so I was so lucky to have all these people come out solely in the name of supporting a project we all believed in.

The cast itself is all women – can you explain the role of that femininity plays in the video, and how that relates to the overall concept of the song?

Well, Katie said at one point she wanted to be surrounded by all her beautiful, babe friends for her first video as Austra, so this video is not about objectifying as some people might see it – it’s about celebrating. The lyric, “nothing’s a mistake” stood out to me, hence my use of mutations, and then puttimg them in a burlesque/strip club type of environment, which is typically male. The girls who are getting “lap dances” are good friends of mine, and I asked them to come out specifically because girls who look like them are typically cast as eye candy for men, but in this case they are getting lap dances from these beautiful, mutant women.

I don’t really want to get into the meaning of the video any further, as people take what they do out of things. But I actually just received the Domino Records YouTube link from Katie, and while I know better than to ever take YouTube comments to heart, I noticed at the top, the most “liked” comment was, “American Apparel: the Video”. This actually made me sad. It’s like if something looks a little raw and has a half-naked girl, it’s summed up and dismissed as American Apparel? Does the person who wrote that comment not see that ironically, they are the sum of their own comment?

The film biz is a pretty male-centric environment – any reflections on this experience working with a bunch of wild women that was different, for better or worse, than your prior on-set experiences, especially as a female director?

I’m still very new to the business, but my experience thus far has been great. On the production side, I have received so much support from men, all of whom can just get behind my vision. Gender or ego has not come into play on any level. Working with all the women on this video was great, and you really felt the feminine energy and support come into play on the shoot day, which made for a great working environment.

Watch the video below: