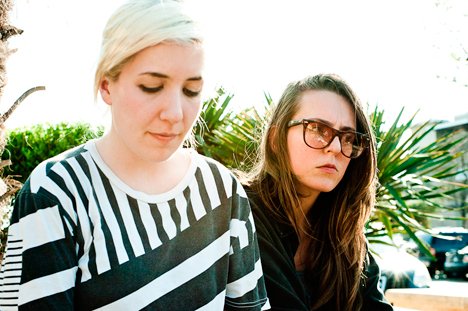 My band and I arrived in Austin after completing the 29-hour drive in three days. Surprisingly enough, it was actually a pretty enjoyable trip.

Being in a band with six people is way more fun than being a solo artist. All crammed into a mini-van, Dorian, Ryan, Sari, Romy and I managed to chat the whole way down about the things we love the most – love, sex, and music.

Maya flew down with her other band, TRUST, so missed out on all the fun.

We spent our first night in Nashville, Tennessee. The hotel was excellent, and had a hot tub and a sauna, which we took full advantage of, despite the fact the cleanliness of the water was more then questionable.

Our second night was in Dallas, Texas and was a slightly lesser experience. When you book a hotel on a discount site you really never know what you’re going to get. It was a Radission, which in theory should be nice, but we felt uneasy when we went to the front desk and noticed it was littered with pamphlets about human trafficking. We asked the receptionist for a cot so our 5th traveling member didn’t have to sleep on the floor, and he responded by saying that there was not one single housekeeper in the hotel, and that the cots were not hygienic.

Immediately we thought of bed bugs, but then when he related the problem to over-crowding we were inclined to assume it had something to do with those pamphlets. The 15 Mexican tour buses outside helped support that theory. My personal belief is that the hotel actually supports human trafficking, and that they were covering up for it with some obvious information booklets about the procedure, but I am slightly paranoid.

Tuesday afternoon we arrived in Austin to a far more enjoyable living space. I rented an apartment and ended up in a three-floor condo with a hot tub. Considering we are squeezing eight people into this place, we were very happy to have the space. I’m not sure how many shows I will be able to see while I’m here because we are a little bit away from the downtown, but nevertheless I’m quite comfortable in my sub-tropical villa, drinking gin and sodas and enjoying the Texas hospitality.

Today my band and I are going to drive to the suburbs to find some true southern BBQ. Apparently there are two brothers who each own a restaurant across the street from one another, and they are rivals in a deep competition about which location has the best ribs. Both are supposed to be unreal. We will go decide for ourselves who is the winner, and then start playing our 9 shows we have booked while we are here. SXSW rules.

Wednesday was our first proper day at SXSW, and the only day I made it out to see some bands. After hunting down as much free food and merchandise I could get my hands on at the Canada Blast tent, I ventured over to the Bike Shop for an intimate gig with Wild Flag, the new super band consisting of ex-Sleater-Kinney members and Mary Timony. The show was amazing. Janet Weiss was drumming on an un-amplified kit and it reminded me of how spectacularly huge SK used to sound. It made me feel nostalgic. Best show of SXSW for sure.

Our gig that night was at Shangri-La, an outdoor venue a bit outside the downtown core. These gigs are my favorite because you can actually find parking and don’t have to lug your gear through 4 blocks of crowded pedestrian-only streets to load in. Our backstage room was an alley way, so that’s where we got dressed, put on make-up and went to the bathroom. SXSW gigs don’t usually provide anything in the way of a rider, but we somehow found out the promoter had a tab at the bar and took advantage of that until he closed it an hour or so later.

Luckily it was just enough to play a show to 500 wasted people and Texan dudes pumping fists with cowboy hats and baseball gloves. Not our usual crowd, but fun nonetheless. After the gig I got to eat pizza and hang out with one friend visiting from LA, another from Portland, and another from the UK, which is ultimately my favorite part about the festival – be able to hang with pals from all over the world in one place.

Thursday started to get really hot. We had leftover pizza for breakfast, and then more pizza at our Prefix Magazine Party show later that day.

We did an acoustic version of Beat and the Pulse and then got ready for our only official showcase at the fest, the Domino Party.

It was probably the highlight of the weekend, with performances by John Maus, The Kills, Owen Pallet and of course my band. Maya’s other band TRUST played at Beerland right after our set, so we all went over there and watched her make fun of the sound guy on stage for a little while. That sound system wasn’t doing them justice, but they pulled it off and people were pumped. I went back to the Domino party and watched Owen Pallett close the night. I don’t think I’ve ever seen him perform drunk before, or to so many drunk people. It was a mega sexy and raw set. By then it was around 2 am, and we eventually managed to hail a cab home two hours later at 4am with all our gear. There were about 100 bands with instruments standing on the streets trying to hail anything that would pick them up, I had to get in an unmarked car with a random man and pay triple the price to get back to my condo in the suburbs.

After doing press at the beautiful Driskill hotel on Friday afternoon, I found out that our Making Time party was cancelled for that night because we weren’t allowed to play non-official shows at night time and the big boys at the fest found out about it.

I was secretly happy because I was nursing a terrible hang over. My band and I decided to have a party at our condo instead, because we figured out how to work the outdoor hot tub and you can buy 2 litres of gin for very cheap in Texas. Only about four people came, but it was nice to escape the drunken escapades of the downtown for a little while. We ended up having a pretty early night, which was good because the next day would be a hard one.

On Saturday we did an NPR session at noon, played a Brooklyn Vegan Party at 2pm, a Nomanis party at 3:30 (that actually got cancelled too) and another party at 5pm with our pals Diamond Rings and Dan Deacon.

Feeling accomplished and satisfied, we were getting ready to load gear and go for some Texan BBQ when we discovered that our van was missing. The next six hours would be spent talking to city officials, police officers and waiting around for someone to come talk to us about our van that we had decided was stolen. There was no record of it being towed, and Maya was sure we were looking on the right street. We tried not to freak out, but the thought of our 2010 Honda Odyssey rental just disappearing was a bit stressful.

Luckily there were lots of kind folks around to buy us drinks and make us feel better long enough for the police to locate it at a towing park. It hadn’t been registered in time because probably 700 vans were towed that day. We took two cabs all the way to the industrial neighbourhood of Austin, picked up our van and kissed SXSW goodbye.