Forget about Raaaaaaaandy and Fat Cousin Harris. The Parks and Rec star and JFL42 headliner just wants to discuss finding love. Oh, and where to find a memorable meal. 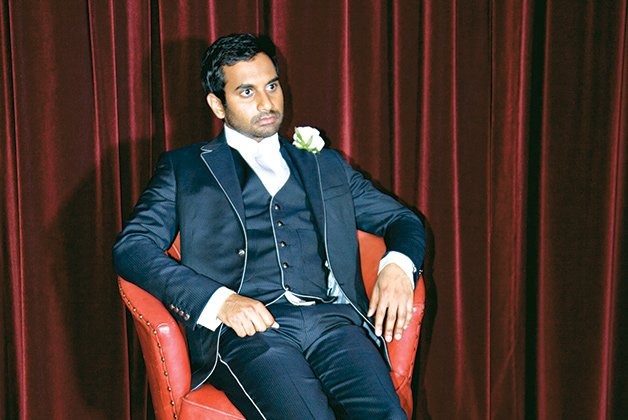 Comic Aziz Ansari is haunted by his own jokes.

He can’t get through an interview without having a journalist ask him for the latest on his chubby cousin Harris or the status of his relationship with Kanye West – both references to hysterical bits in his star-making 2010 debut special, Intimate Moments For A Sensual Evening.

These days, Ansari wants to be known for more sophisticated material than tales of getting wild for the night with Yeezus.

But the ghosts of his breakthrough first act keep chasing him.

During the recent Comedy Central roast of James Franco, Ansari’s fellow comics zeroed in on his friendship with Kanye. He actually seemed more offended that they dredge up his old material than at the racist Indian jokes directed at him all night.

And fans and journalists still bring up Raaaaaaaandy, his stand-up character from Judd Apatow’s 2009 movie Funny People, who was rumoured to be getting his own spinoff at one point.

“I did that character for Funny People,” he says, “and I haven’t done anything with it since then. I did it just for that movie.”

Ansari clearly wants to put all that behind him. His new focus is love in the 21st century, with big questions like “How does romance work in the age of texting and social media?”

Ansari, who turned 30 in February, says the subject has been weighing on his mind.

“I’ve always talked about stuff I’m dealing with,” he says on a day off from shooting the sixth season of his NBC sitcom Parks And Recreation. “Now I’m getting old. I’ve got to find someone to love and start a family with. This is, like, scary shit!”

That anxiety forms the basis of the act he’ll be performing next weekend as part of JFL42. He discusses the minutiae of modern courtship in the age of tech, for example, when you’re waiting for someone to text you back and then see them Instagramming pictures of pizza.

“I make it clear that I’m not a malicious person,” he says. “I’m not going to hurt their feelings.”

Ansari describes his new act as a companion to his upcoming first book, tentatively set for release in 2015.

The memoir will relay the comic’s experiences with modern love, combined with his own research, including interviews with academics and sociologists.

“I’m hoping I can make a very interesting book about dating and finding love in this era,” he says.

Penguin is counting on it. The publisher just paid him a $3.5 million advance for the project, a deal that’s being compared to Lena Dunham’s reported $3.7 million from Random House for her upcoming advice book.

Having his paycheque made public weirded him out.

“No one’s ever talked about how much money I’ve made from touring or from a show,” he says. “It seems bizarre that it’s not frowned upon to leak what someone’s getting for whatever project.”

But for people seeking guidance, how relatable will this book be? I mean, c’mon. Ansari is rich and famous, having spent years building a loyal following on the strength of his distinct voice – high-pitched and emphatic, with the observational comic’s gift for finding absurdity in the mundane, and a palette of internet and pop culture references his contemporaries aren’t up on.

Given his success, he can’t really be having that much relationship trouble, can he?

The comedian agrees that being on TV can work in his favour, but he insists most dating problems are universal.

“I think there’s some element of [an advantage in fame], but I discount that immediately,” he says, citing a bit from his 2012 special, Dangerously Delicious, where he runs through all the possible options of approaching a cute female waiter, including trying to play the fame card. Each scenario comes off creepier than the last.

His new relationship theme makes the content of Ansari’s comedy more mature. But so is his method. While building his act, he wanted to test it out precisely, in front of audiences like those he’d be facing in theatres across North America.

That meant avoiding the jaded crowds at comedy clubs where he could drop in to workshop new material. So he started to announce smaller shows through Twitter, but that didn’t solve the problem.

“I would announce the shows on Twitter, 200 seats or something, and it’d sell out in two seconds,” he says. “It’s like, ‘Who are the people coming to that? Who are the people maniacally following me on Twitter?’ I don’t want just those people to come.”

Ansari finally decided to fine-tune his crowds through a questionnaire on his website (azizansari.com).

“Like, are you male, female, what’s your age?” he says. “I wanted to get a mix of people. When I do a show in Toronto, there’s like 3,000 people – old, young, married, single, a good mix. So the goal was to recreate that in a small environment.”

Those at his September 27 shows will get to see if all the focus-testing paid off. He hasn’t performed this material in a theatre the size of the Sony Centre, and he’s looking forward to gauging the audience’s reaction.

Ansari is no stranger to big venues, having headlined three major North American tours. But just eight years ago the Columbia, South Carolina, native was a marketing student at NYU, performing in small clubs as a member of New York’s Upright Citizens Brigade Theatre. In 2007, video shorts Ansari made with friends Paul Scheer and Rob Huebel led to an MTV sketch comedy show, Human Giant.

During his rise, he famously sidestepped lucrative offers to depict accented Indian characters working at call centres. He’s been compared to writer/comic Mindy Kaling in that regard.

“I’ve made it pretty clear that that’s not what I’m interested in doing and that those offers don’t make it across my desk, if you will,” Ansari says.

In 2011, he played Jesse Eisenberg’s best friend, Chet, in the modest hit movie 30 Minutes Or Less.

His most enduring role, however, is that of slick-talking baller Tom Haverford from Parks And Recreation, a part he’s played since the show debuted in 2009.

And success has only increased his appetite… for good food.

He once went on a three-day Tokyo food binge with James Murphy of LCD Soundsystem and Momofuku founder and chef David Chang for a feature in GQ.

After our talk, he tells me he’ll be making a NutriBullet smoothie with kale and fruit, and a frittata. “I’ve been really into frittatas lately,” he says.

He’s looking forward to returning to Toronto’s restaurants, and shouts out Pizza Libretto on Ossington as one of his favourite spots, then quickly regrets it.

“Maybe I shouldn’t say where I like to go, because someone who’s trying to murder me will be there,” he says.

Does Ansari have any plans to connect with Drake while he’s in town?

“I don’t know if he’s around. He’s probably doing stuff for his album, but if he’s around I’ll tell him to come to the show,” he says. “I haven’t seen him for a long time.”

The rapper’s latest single, All Me, opens with a sample of the comedian’s Raaaaaaaandy character. Will Ansari be getting paid for that?

“I don’t know how that works,” he says. “I mean, I imagine since it’s from the movie and stuff I might get some sort of cheque. But I’m not going to go buy a boat with it.”