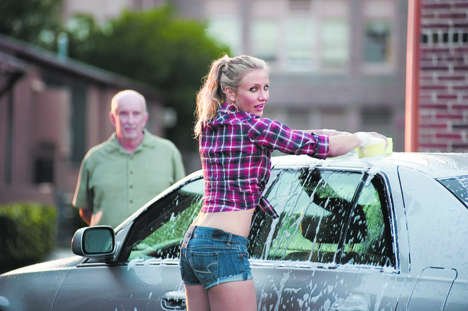 Cameron Diaz hopes to get major mileage from Bad Teacher.

Bad Teacher was not written by the people who gave us Bad Santa, though it follows that film’s template almost scene for scene. But it’s actually funny and entertaining rather than just smugly waving its presumptive transgressiveness in our faces. (To be fair, casting Billy Bob Thornton as a surly asshole who treats everyone with contempt was much more revolutionary before that Jian Ghomeshi interview.)

Bad Teacher stars Cameron Diaz as Elizabeth, a high-functioning sociopath who teaches seventh grade at a dinky Illinois middle school. Well, “teaches” is a stretch her idea of expanding young minds is spinning up the DVD of Stand And Deliver and quietly passing out at her desk.

Motivated primarily by self-preservation and greed, Elizabeth soon fixes her gaze on the new substitute teacher (Justin Timberlake), who smells like old money and innocence. A goody-goody teacher (Lucy Punch) suspects her motives are less than pure and will do anything to stop her, while the gym teacher (Jason Segel) watches bemusedly from the sidelines.

So, yeah, it’s pretty much Bad Santa with a teacher. But again, a key difference: director Jake Kasdan (Orange County, Walk Hard: The Dewey Cox Story) makes a big effort to bring this movie to comic life. If its master plot is utterly predictable, the way it unfolds is unapologetically cartoony and weird. Kasdan embraces his adult rating and invites his actors to swear, screw, smoke up and generally trash the place, and they’re totally up for it.

The energy Diaz brings more than makes up for her bland turn in The Green Hornet, and Timberlake is scarily convincing as someone who’s used to having his looks compensate for his vapidity. Even Punch, a gifted English actor who tends to oversell the zany – as in last year’s Dinner For Schmucks – meshes nicely with Kasdan’s farcical vibe.

But it’s Segel who slowly emerges from the sidelines to become the most interesting thing in the movie. As an affable, unassuming guy who’s hip to Elizabeth’s game but still attracted to her, Segel bobs and weaves through screenwriters Lee Eisenberg and Gene Stupnitsky’s formulaic scenes like a jazz performer riffing on an old standard. By the end of the picture, you’re really enjoying the notes he doesn’t play.