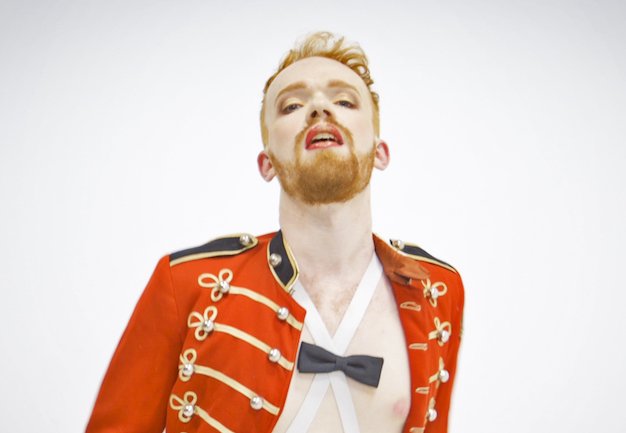 I’m incredibly inspired by Glad Day Bookshop. Ever since it moved to Church Street, it’s been like Gay Cheers and I can’t get enough of it. I live nowhere near The Village, but I keep finding myself coming up with excuses to meet people there or bring my laptop to do some writing there and grab a coffee. It’s such an open, positive, supportive space and I love that you can buy books there AND have a sexy dance party all in the same room! It’s only been in the new location for about a year, but I’ve already made a ton of lovely memories there, from launching the book of my play Redheaded Stepchild there, to participating in last year’s Naked Heart literary festival (which is an inspiration in its own right), to DJing a Buffy-themed dance party there that was maybe one of the best nights of my life.

I really loved The Wedding Party, particularly the scenes were Kristen Thomson plays the family dog which makes me laugh to even think about.

As in, a show that I’ve done that’s gone really well? Maybe this is corny, but I often feel like that experience itself IS the celebration. Like, what could feel better than performing a killer show for an audience of people you can tell is really connecting with the material? There’s nothing more satisfying than that. That said, I’m always pleased to grab a drink after a show with collaborators or engaged audience members and see what kinds of conversations the work has provoked. And we should all probably be having more post-show dance parties.

Really looking forward to Kiinalik! Sounds like such a fascinating and important collaboration. I’m also excited for the return of Black Boys. I saw it the last time it ran at Buddies and just loved it – such an electric show!

Toss up between the dirty chai latte at Tucana Coffee and the White Rose cocktail at tragically soon-to-be-defunct The Steady.

When I was about 12 years old, I was one of the Gingerbread Children in a Canadian Opera Company production of Hansel & Gretel with gorgeous sets designed by Maurice Sendak.

Beardoncé! Toronto has such an amazing drag scene and picking your fave is tough, but I have a real soft spot for Sean Parsons AKA Beardoncé. Since 2016, we’ve collaborated on a party I DJ called Hey Girl Hey (which has been at The Steady thus far, but after they close next month will be a bit more nomadic). She’s got a killer androgynous look, she can wrap any audience around her finger, and she’s able to bring the kind of emotional connection to a lip-sync that guarantees goosebumps. Beardoncé is the probably funnest person in Toronto and anyone who hasn’t seen her yet is missing big!

I’ve been using my residency at Buddies over the past couple of years to develop a play I’ve been writing called Shove It Down My Throat, which is inspired by a violent incident that occurred several years ago in Atlanta. We like to call it a gonzo true crime docu-play about homophobia, violence, incarceration, sex and mystery. In the show I play a version of myself investigating the increasingly complex and problematic story. I also have a short film called Saturn Devours which is currently playing the festival circuit.