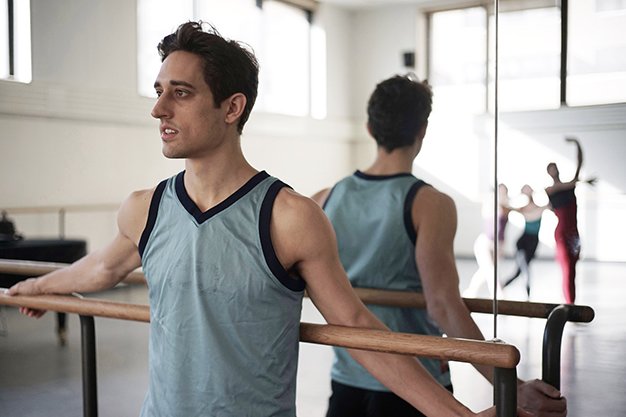 Dancer/choreographer Justin Peck doesn't crumble under the pressure in Ballet 422.

If you’ve ever wondered what goes into mounting a new ballet, Ballet 422 takes you through practically every step. Too bad there’s not much drama on the journey.

Justin Peck is a New York City Ballet corps dancer in his mid-20s. He’s also a talented choreographer. Jody Lee Lipes‘s vérité doc looks at a short piece he’s created – the company’s 422nd new work, hence the title – from conception to rehearsal to performance. The film covers the two months leading up to its premiere in 2013.

If you’re interested in the performing arts, all this material will be fascinating, from working with lighting and costume designers and stage managers to delicately negotiating with the conductor – one of the few moments of tension – to give a pep talk to the orchestra.

Problem is, Peck is an unnervingly calm and serene subject. Nothing fazes him. He doesn’t seem to have any particularly good friends at the company, and we don’t get any glimpse of his personal life. After the studio, at home, he studies rehearsal footage.

Still, there are worse ways to spend 72 minutes than watching beautifully expressive dancers like Tiler Peck, Sterling Hyltin and Amar Ramasar learn the moves, get fitted for costumes and apply their own makeup.

And since dance is so difficult to describe, there are some great expressions. My favourite is when Justin tells a performer a sequence is “not crispy enough.” Thing is, you get what he means.