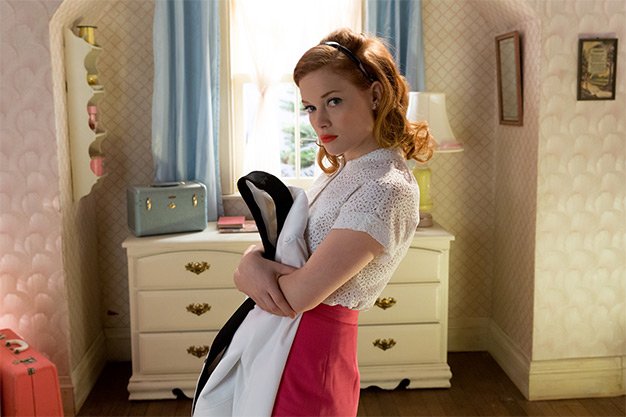 Jeffrey St. Jules’s Bang Bang Baby won the best first Canadian feature award at TIFF 2014. And no wonder. The stylish film shows the writer/director’s geeky appreciation of a certain type of period movie. It’s a shame the script and tone are a little off.

It’s 1963 in the small Canadian town of Lonely Arms, and Stepphy (Jane Levy) is a high school student/aspiring singer whose dreams of entering a New York talent competition are thwarted because she has to look after her drunken dad (a miscast Peter Stormare), himself a failed musician.

When her idol Bobby Shore’s (Justin Chatwin) car breaks down in town, Stepphy offers help (she’s also a mechanic) and puts him up at her house. Romance and a couple of duets ensue. Too bad a factory chemical spill is turning all the residents into mutants.

But he gets strong performances from the cast, who all channel 60s archetypes while maintaining their individuality. He has a great eye for composition, and Darren Fung and Richard Pell’s songs actually sound like they could have been hits.

Don’t be surprised if you leave humming the catchy title track.