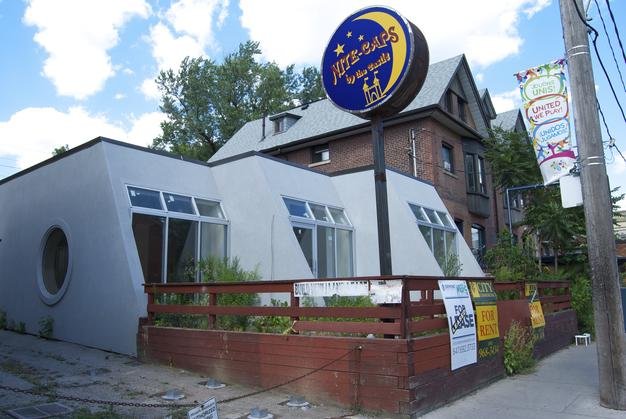 With four eateries already located on Dupont, Anthony Rose has helped transform the Annex’s northern reaches from sleepy neighbourhood strip to culinary hot spot, but signing the lease at 252 Dupont might just be the nicest thing he’s ever done for the area.

Last month, it was revealed that one of the city’s weirdest empty commercial spaces – picture a Back To The Future vision of what a three-car garage might look like in 2015 – would soon become the site of Rose’s first cocktail spot, Bar Begonia.

The blocky, step-like structure started out as a Japanese restaurant, Madoka, serving what we described in these pages as “strictly vegetarian Far Eastern fare.” Then, for a brief time, it was the kitschily named Nite-Caps by the Castle, whose moon-festooned sign still stands out front. After that the doors were boarded up, the wooden exterior was left to rot, and the building began its 12-year tenure as the neighbourhood’s biggest eyesore.

Rose actually took a spin through the space a decade ago to see if it might be right for his first restaurant. Like many others, he was scared off by the astronomical lease ($4,500 a month, as of 2011) and bizarre design.

The owners sat on the property for a few years, but things finally clicked earlier this year. It’s since been cleaned up and given a coat of white plaster, and Rose’s plans for the blank canvas – a “Paris-meets-Brooklyn” vibe – are taking shape. He’s working with a graffiti artist to give it a “baroque” vibe (including painted floors), and renovating the patio in the back to include a covered seating area and picnic tables.

The back will also feature a wood-fired grill surrounded by an oyster bar – but the food program will take a back seat in an effort to let his staffers’ cocktails shine.

“All our places aren’t necessarily cocktail-heavy,” Rose says. “They’re very, very food-forward, and that’s exactly what we do and what we want. [But we] kind of realized that, well, we really don’t give these people enough of a chance to have fun with the cocktails. It gives our staff a chance to play.”

Look for Bar Begonia to open in November.

Robotic cafes, smart kitchens and cubby restaurants have been popping up around the city and they're expanding during the pandemic