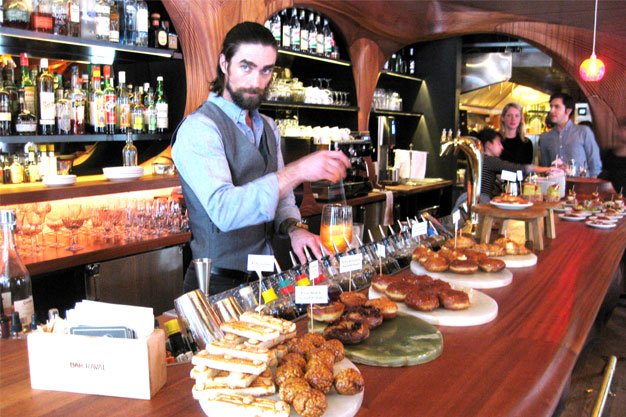 Snacks were still huge at places like Bar Raval

Bar Raval, this year’s most hyped opening, is as blatantly one-of-a-kind as it was intended to be.

The striking space (formerly Teatro) is encased in elaborate custom woodwork by Toronto architecture/design firm Partisans, giving it a sense of cave-like intimacy. It’s like you’re washing down pintxos (Basque-style snacks) with vermouth inside the belly of a beast dreamed up by Guillermo del Toro and shaped by Gaudí.

Though it channels the pintxos bars of Barcelona (it’s named after a neighbourhood in Catalonia’s irresistible capital), Raval is decidedly Toronto 2.0 – confident, uncompromising and a slave to flavour.

Although Wu Tang logos brand the bar’s drip trays and mark the washroom doors, baroque webbing creeps across the windows and one of the cocktails contains squid ink, Raval’s Spanish influence is obvious. Seating is minimal, and so is cutlery. Peripheral counters and upturned Pilsner casks are set with paper napkins and toothpicks so you can wipe the grease from your chin between scarfing morcilla topped with quail’s egg ($8) and spearing squid fried in pig’s fat ($8).

Owners Grant van Gameren (chef), Robin Goodfellow and Michael Webster (bar overlords) want this to be a spot that can be enjoyed at any time of day it’s ambitiously open from 8 am to 2 am, seven days a week. They take coffee as seriously as cocktails, and van Gameren’s bites – which adorn the bar daily ’til late afternoon – are addictive.

Cocktail options are listed as aperitivi, alto vasos (tall drinks), shaken-and-stirred, and – in a renegade play, given how bartenders tend to shun vodka – vodka-based. Low-alcohol cocktails are a feature, making the prospect of day (or chain) drinking that much more appealing. The wine list is short and sweet. there’s food-friendly beer like Pilsner Urquell on tap – alas, no Estrella.

If you’re indecisive, keep in mind that the bartenders are top-notch trust them to fix a drink tailored to your taste ($16). Just be patient till 11 am – at Raval, as in Spain, there’s no rush.

Access One step at the door, washrooms in basement