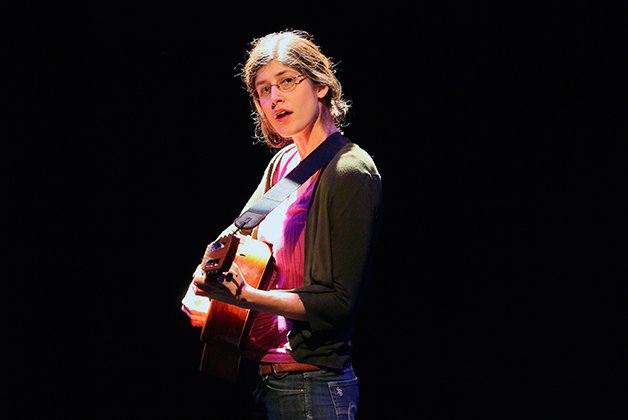 Daniel MacIvor’s A Beautiful View – a memory play about a decade-long relationship between two women – was a big hit when it debuted in 2006 in a stellar da da kamera/Buddies production starring Caroline Gillis and the late, great Tracy Wright. Now Toronto’s Volcano and Munich’s BeMe Theatre are presenting a new take on it, directed by Volcano’s Ross Manson, featuring a score by German composer Krister Schuchardt. It stars Amy Rutherford (Goodness, Divisadero) and Becky Johnson, who’s better known in the improv comedy world and as a clown but has made some impressive theatre outings, most recently in Sheila Heti’s All Our Happy Days Are Stupid. The play opens tonight (Thursday, February 27) at the Factory Studio. See listing.

The two unnamed characters in A Beautiful View have a long history that you need to suggest subtly. Did you and co-star Amy Rutherford bond in any special way before, during or after rehearsals?

Amy and I met in high school at the Canadian Improv Games. Our career paths have been quite different since then (me doing clown and improv, she classically trained with much more dramatic experience). Getting to re-meet her through this process was such a treat. And I feel that our long-time knowledge of one another really feeds into that sense of odd intimacy in the play.

You performed the piece in Munich. Did the Germans laugh in the right places?

This show is really interesting in that it doesn’t have right places to laugh. It sits right on the edge of humour and drama a lot of the time. Different audiences receive it differently, and that always felt correct. Plus, being an English production, we were playing to a lot of expats, so I can’t really speak to German sensibilities in this case.

Did you pick up any great German expressions?

I learned how to order a litre of beer.

Who in the theatre or comedy community do you have a girl-crush on?

There are always so many, but I’ll go with Carolyn Taylor, mostly because I can’t stop thinking about the amazingly bizarre nun she played in Wayward, the serialized improv show I directed for Bad Dog Theatre last year.

At the Inessa Frantowski farewell show at the Comedy Bar, you won one of her sequined dresses. What have you done with it?

I wore it to a house party for New Year’s and overwhelmed everybody. Sarah Hillier and I did have the idea to do Catch 23 Improv in sequins and call ourselves Inessa’s Dresses. Maybe we should get on that.

You recently starred in Sheila Heti’s All Our Happy Days Are Stupid. How much fun was it to have cat fights with (former NOW theatre writer) Naomi Skwarna?

I can’t imagine anyone I’d rather get catty with than Naomi. In fact, I can’t understand exactly how two such potentially loathsome women were so much fun to play. Naomi was so good in the role, in fact, that I predict she will soon quit writing altogether in favour of the lucrative life of an indie theatre star.

How does improv affect your theatre work, and vice versa?

I don’t see the theatre and improv work I do as all that different. It’s just that the sections in arts weeklies tell me otherwise.

Besides your Sufferettes partner, Kayla Lorette, who’s your favourite comic to improvise with – and why?

Right now I’m really enjoying improvising with Dan Beirne. He’s a master at playing comedic moments to their fullest, always stays true to the reality of a scene, listens minutely and doesn’t get too upset when I try to smooch him in scenes.

You’re embarking on an Ontario tour after the Toronto run. What place are you most looking forward to – and why?

North Bay, because it is far away, I have never been and I know almost nothing about it.