We love Tagaq for her fearlessness. Throughout. 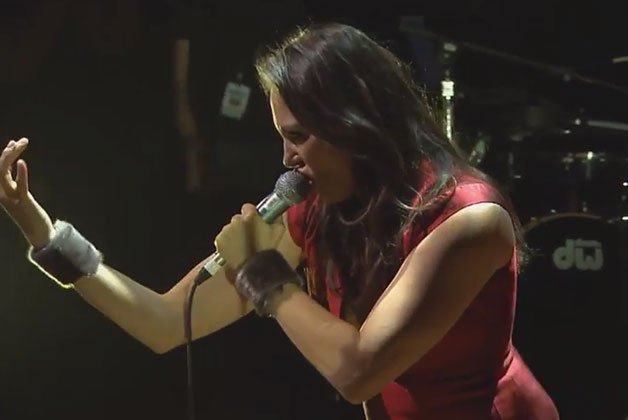 We love Tagaq for her fearlessness. Throughout her career and especially on Animism, our album of the year, the ex-Björk collaborator went far beyond the kinds of creative risks musicians crow about with each new release – hell, she actually reinvents what music can be.

The album opens with the Yellowknife-based Inuk musician singing deceivingly sweetly atop some percussive thump on a reimagining of the Pixies’ Caribou. But it isn’t long before her skilful throat-singing and vocal experiments take over: guttural and feral, punctuated by rhythmic breathing, gasping, shrieking, growling and grunting, all given shape and momentum by producer Jesse Zubot’s furtive strings, ominous horns and electronic soundscapes, Jean Martin’s percussion and, on one song, Anna Pardo Canedo’s operatic singing.

The near-wordless album manages to say more than most lyric-heavy ones in recent memory. What comes across is something earth-respecting, animal-revering, spiritual, life-giving. In performance and interviews, she doesn’t hold back politically – the names of missing aboriginal women scrolled behind her during her Polaris Prize gala show in September she Instagrammed a “sealfie” photo of her baby lying next to a dead adult seal back in March.

Meanwhile, her raw, ferocious performance style will take you away from even the biggest calamities in your life. Which is why her November 6 show at the Great Hall is our concert of the year, making her the first artist to claim two top spots on our year-end lists. We need more women in the spotlight so at ease with who they are and where they come from.

Is Animism an easy listen? Not always, though it depends where you sit on the experimental music spectrum. The song Fracking is so intense, it might give you nightmares. Does it stir you and make a lasting impact? Absolutely.

“There’s no musician in this world more powerful,” said Geoff Berner, in his intro speech for Tagaq’s performance at the Polaris gala, where she won the $30,000 prize.

We agree. Animism captures and delivers Tagaq’s voice at a time when we need it most.