Plus: we check out the pub grub from two newbies, Batch and Mascot Eatery 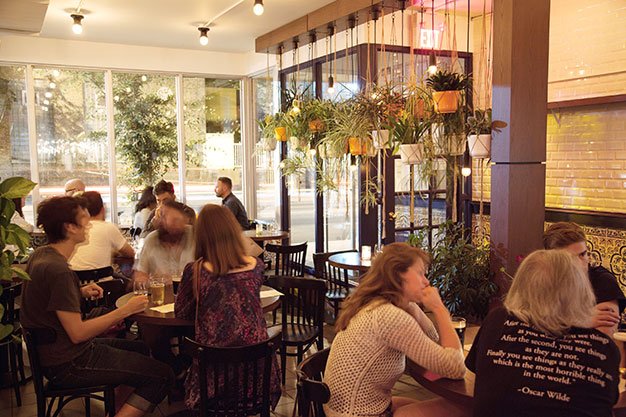 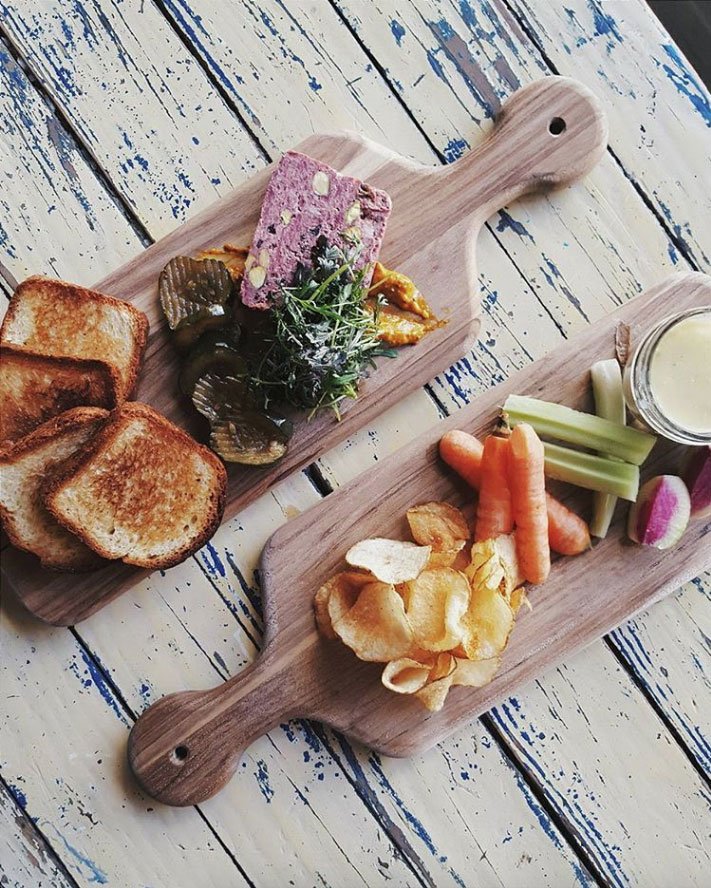 It’s a brewery! It’s an acoustically finessed music venue! And, thanks to chef Jeremy Dennis, formerly of Woodlot and Chantecler, it’s also a perfect spot for date-night dinners. Dennis keeps the menu moving to best capitalize on what’s in season, but a few things are constant: excellent house-baked bread and loads of seasonal produce grilled or caramelized to maximum succulence. Currently featured: charred and pickled asparagus smoky curried eggplant with cavatelli. Pub food this ain’t. Read about Burdock’s beer on page 23.

The sunny front patio and tanks brimming with some of Toronto’s most beloved small brews (see more on page 23) don’t hurt, but the all-killer, no-filler food menu – lemongrass ribs, Italian duck meatballs, chorizo-scattered mussels in a seafood broth – does its part to contribute to the perpetual line down Ossington. Bonus: you can go to Bang Bang across the street and get a scoop of porter- or APA-laced ice cream.

There seem to be two ways to do brew pub food: a tiny menu with artisanal flair or a sprawling selection of deep-fried everything. This Junction brewhouse merges the best of both worlds in a list of three dozen menu items with flair to spare, like papaya-habanero or maple-licorice chicken wings, mac and cheese with cheddar curds and black truffle, or personal pizzas topped with BBQ duck and fior di latte or wild mushrooms and sautéed kale. More on the beer on page 26. 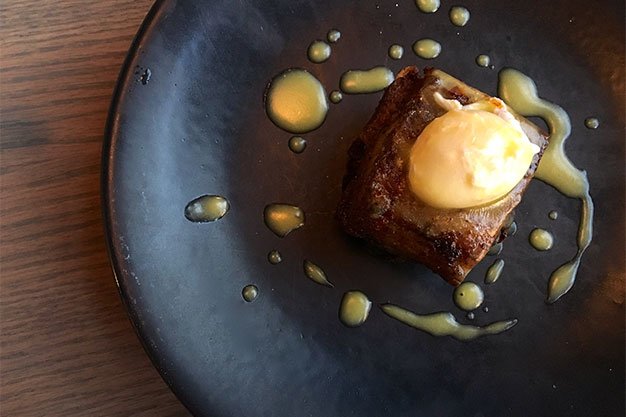 The ground-floor space that anchors Mascot Brewery’s complex on Mercer has thus far been overshadowed (in both location and fame) by the rooftop patio and adjoining nightclub, Odd Thomas. Both are decidedly easier on the eyes – the first-floor Mascot Eatery is pretty charmless in daylight, with a window looking out onto a parking lot scattered with skids and tarps – but bar lighting and beer goggles are both incredibly forgiving. 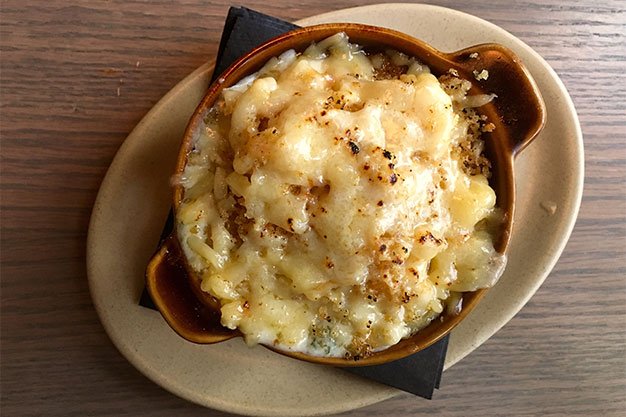 Technically, the “brew” part is still on the way – Mascot is doing it off-site at Duggan’s until the rest of its equipment gets installed in a few months. Along with some of those nascent house brews, including a pilsner and a hefeweizen, it’s relying almost entirely on outside breweries to flesh out its varied tap list with fun limited runs like Sawdust City’s The Princess Wears Girl Pants.

The food menu is designed for groups: everything save the -burger on a pretzel bun is tapas-sized, with comfort food a running theme. Gently spicy, tomato-laden shrimp and grits is a cross between Italian polenta and jambalaya. 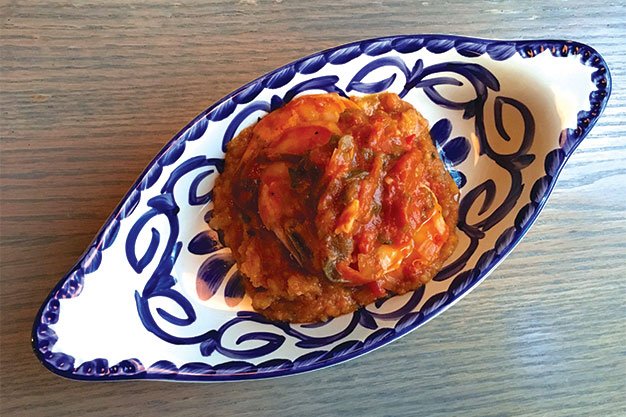 But that’s pretty boilerplate compared to the “lamb, bacon and egg,” a deconstructed, bite-sized take on steak and eggs enthusiastically recommended by the knowledgeable wait staff. A single fried, starchy-sweet purple potato comes under a fat-bellied slab of lamb with an oozing little poached quail egg on top, surrounded by dribbles of hollandaise. The dish could get brightened up (maybe some lemon in that hollandaise), but I couldn’t help but be impressed. For a brew pub, it’s pretty high-concept- stuff.

Other house faves include a classic steak tartare with quail egg and crostini, and a piping-hot ramekin of mac and cheese given depth by a hint of roasted bone marrow. Even if you’re only here to party on the rooftop (or if you wouldn’t go within a mile of Mercer for any other reason), I’d suggest you let Mascot surprise you. 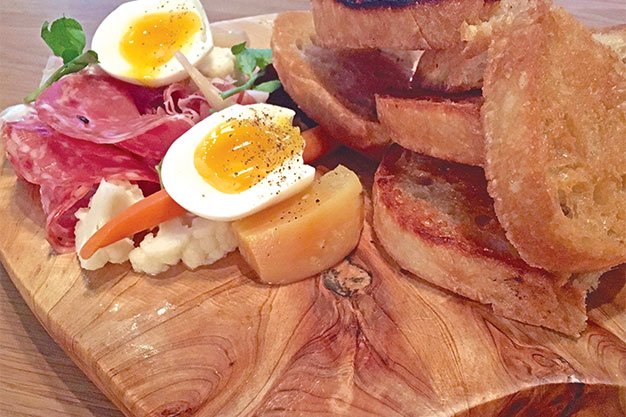 The charcuterie at Batch is all Ontario-made – and served with an out-of-proportion portion of bread.

Molson swapped one brand for another at 75 Victoria at the end of 2014, ousting Six Pints Beer Academy for a new shrine to Creemore Springs. Batch opened this spring as a vehicle for the Ontario brewery, with an on-site bottle shop, dining room and downstairs event space, plus an all-new menu from former La Société chef Ben Heaton.

We’re spoiled for great indie brew pubs in Toronto, and your average Torontonian will walk into Batch with bullshit detectors a-flaring. The spot is pretty striking – tall ceilings, exposed brick – but clubby touches like men’s belts holding up the booth cushions, are on-the-nose nods to the business clientele the management is obviously hoping will come from a few blocks east.

Your Creemore faves are all on the super-short beer list, plus one seasonal tap (currently a not-bad blood orange Belgian). The food menu goes broader, doing luxe pub food and steak house classics. Everything I tried came with a catch: the smoked devilled eggs were velvety and rich but tasted like straight Dijon instead of smoke, with the chicken skin crisp perched on top cold and thickly fried. They were pricey, too: $8 for three half-eggs.

A roasted broccoli salad featured some bold, nutty, lemony flavours fleshed out with pickled onion and sweet dried berries, but the cold dressed broccoli’s texture was a tad slimy.

The charcuterie board included great house-made pickled veg and a gorgeously poached egg, but the small pile of meat was dwarfed by five thick, buttered, fried slices of bread. And when I asked what we were looking at, our server had to dash off, then return to point out “salami” and “prosciutto.” I thought back to a visit to Bar Volo a few days before, where Ontario-smoked Gouda and three-year-old cheddar were presented with pomp. If I’m paying $17 for eight slices of meat, you’d best be able to tell me what it is and where you got it.

I wouldn’t throw out the entire Batch (har), but the considerable sheen on the place doesn’t stack up against the substance of the rest of the city’s beer scene. Walk, don’t run – and maybe keep walking till you get to Bar Hop or C’est What.

Get more from this year’s Beer Guide here.