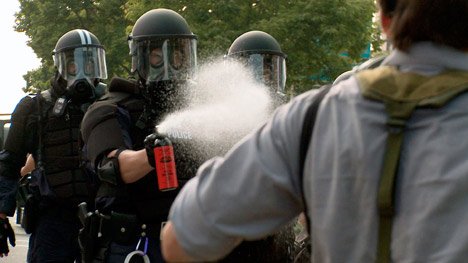 Better This World tells the disquieting story of David McKay and Bradley Crowder, friends from Midland, Texas, arrested during the Republican National Convention of 2008 in St. Paul, Minnesota. Charged with manufacturing Molotov cocktails with the intent of using them against policemen and security forces, they’re painted as terrorists and face serious prison time – but the case against them isn’t nearly as simple as it looks.

With remarkable access to the accused and their families, directors Katie Galloway and Kelly Duane de la Vega present the friends’ legal odyssey as a snapshot of America’s steady suspension of essential liberties in the wake of 9/11, as the Bush administration slowly eviscerated the Constitution and Bill Of Rights. That damage will take decades to repair, but this documentary offers reformers an excellent starting point.