NOW MagazineMusicConcert reviewsBeyonce and Jay Z at the Rogers Centre

Beyonce and Jay Z at the Rogers Centre

BEYONCE and JAY Z at the Rogers Centre, Wednesday, July 9. Rating: NNNTwo and a half hours of Beyonce and. 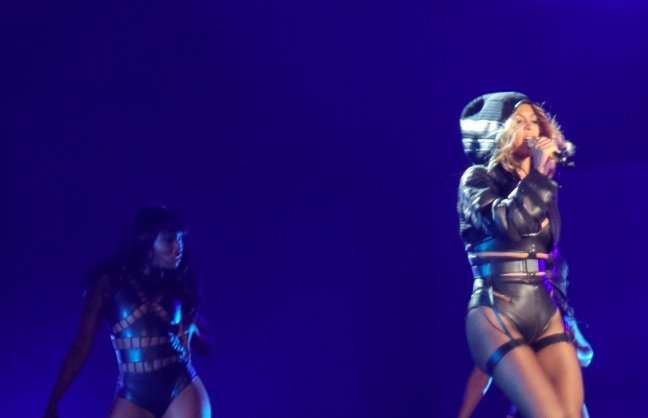 Whether you’re in a hopelessly devoted couple (there were lots of those at the Rogers Centre), or nursing a freshly trampled heart, Mr. and Mrs. Carter will make your love – past, present or future – feel inadequate.

The duo didn’t have the full backing band and arsenal of singers from Beyonce’s last solo tour, or the DJ and instrumentalists from Jay Z’s. They did, however, have polished, sexy Bonnie and Clyde-style videos flashing on the giant screens that dwarfed the stage: the Carters are selling us on their American Dream, us-against-the-world relationship, and it’s impossible to look away.

Still, there was something hollow about their chemistry on Wednesday. The couple are parading their On The Run tour around North America just two months after the Solange elevator fiasco and amidst swirling rumours of Jay Z’s infidelity. It’s therefore impossible not to filter the show through a suspicious lens.

After leading off with two of their biggest co-hits – 03 Bonnie & Clyde and Crazy In Love (so soon!?), Bey and Jay alternated bangers without much interaction or even a stolen glance.

In a never-ending rotation of thigh-baring onesies, and accompanied by a formidable squad of backup dancers, Beyonce did the lion’s share of the work, performing songs from her December self-titled album. These were interspersed with a smattering of Jay Z’s greatest hits – nothing new, especially if you were at his solo show in January or even his Watch The Throne tour with Kanye West (Clique, No Church In The Wild and a snippet of Hell Of A Life were a few of many nods to the newest Kardashian).

After a while, you wondered if this would be like Jay Z’s disjointed, seesaw Legends Of The Summer tour with Justin Timberlake – the singles were all whipping along so fast, nary a ballad or tender moment between husband and wife to be found.

An hour into the show, the two finally delivered some onstage PDA for Drunk In Love, the first moments of genuine satisfaction. Then, over halfway into a 43-song setlist, Beyonce turned up to Vegas showperson level. A six-woman backing band materialized for an angry, riled up performance of Why Don’t You Love Me, and all of a sudden, during this, the best number of the evening, you realized On The Run could be so much more than a greatest hits medley. Beyonce’s voice was rich and fierce as ever and her band hella tight (why didn’t she use them more often?).

It also kicked off the back half of the concert, during which the Carters played on all of our relationship-status speculation with a betrayal-themed storyline:

First, Jay Z’s famous 99 Problems anthem (key line: “I’ve got 99 problems, but a bitch ain’t one”), then Beyonce’s weirdo rock mutilation of her lonely If I Were A Boy slow-jam.

After a video interlude of Beyonce walking down the aisle, Jay Z delivered his most heartfelt raps of the night, standing solemnly at the mic for Song Cry, an exceptional cut from his Blueprint album that laments a relationship marred by infidelity.

After another video of Bey and Jay on a motorcycle and Beyonce riding a horse in slow motion (basically a rip-off of Kim and Kanye’s Bound 2 video), Mrs. Carter, still in wedding white, performed her famous concert ballad, Resentment. (Yes, she has changed the line “Been riding with you for six years” to “12 years,” further stoking the rumour mill.)

By this point in the show, the Broadway presentation of the Carters’ relationship is compelling, it’s true. But you also start to wonder if you’re being played: if there’s a cheating throughline in this musical, or in the media, it’s because Beyonce and Jay Z want it there to serve their own juggernaut.

“Forgiveness is the final act of love,” said Beyonce’s holier-than-thou voice over the PA, pushing the show over the brink of its conflict and climax into the long, happy, love-filled denouement renditions of Love On Top, Izzo (H.O.V.A.), Single Ladies, Hard Knock Life, Pretty Hurts and Young Forever. Finally, as the couple stood side-by-side, the melodramatic strains of Halo became the soundtrack to never-before-seen Mr. & Mrs. Carter wedding footage and adorable home video of their three-year-old daughter.

You don’t totally buy it, though. Beyonce’s perma-smile and near robotic perfection are impenetrable. If she is ever “off,” it’s certainly not in front of 50,000 people. It’s hard to tell what she’s feeling about her husband or if she’s even feeling at all. Jay Z – who delivered the night’s only nuggets of crowd interaction – is slightly more approachable, but he sure as hell isn’t letting on if there’s trouble in paradise (you can’t see ’em coming down his eyes, so he’s gotta make the song cry, remember?).

All of which is to say, that a Beyonce and Jay Z concert delivers the goods in terms of singalong hits and spectacular visuals, but ultimately leaves you with a lot of questions:

Are we on the verge of another conscious uncoupling? Why so many nods to Kanye – if you love him so much, couldn’t you have gone to his wedding? How is it possible that even when onstage together, Beyonce has an ever-blowing wind machine, but Jay Z’s little hipster cowboy hat never tipples off his head (is it attached to her person?).

But then, it’s impossible for us mere mortals to question or analyze the likes of Bey and Jay, the first couple of pop culture. Just get up on your chair and enjoy the Blue Ivy montage.