BEYONCE at Rogers Centre, Wednesday, May 25. Rating: NNNNThe most memorable image from Beyonces Formation tour was of the pop. 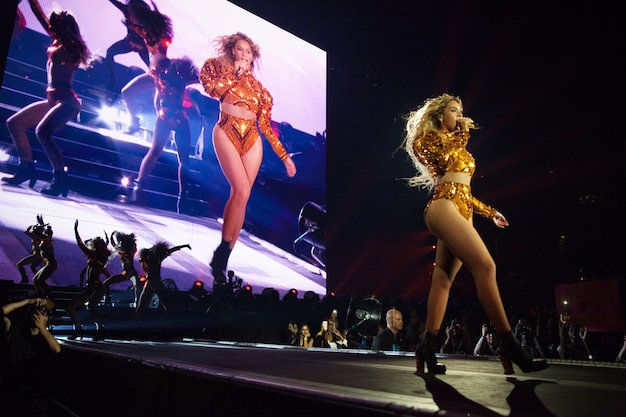 The most memorable image from Beyonces Formation tour was of the pop star standing alone onstage dwarfed by a projection of herself on a seven-storey screen.

It was an appropriate metaphor for this moment in Beyonce history. The 34-year-old is in the midst of a 41-date stadium tour in support of her sixth album, Lemonade, which instantly became a flashpoint for wider discussions around feminism, race and gender, as well as gossip fodder thanks to a marital infidelity narrative.

With Lemonade, Beyonce tapped into something bigger than herself. Its themes of anger, redemption and forgiveness were present in the Formation tour but largely subsumed into a pop spectacle that was less about politics and all about Beyonce’s commanding presence.

Unusually, she began the show not with a song but a pep talk. As images from Lemonades companion short film flashed across a massive rotating monolithic box, the opening bars to mission-statement single Formation rang out and Beyonce strutted to centrestage flanked by 20 backup dancers and revved up the 53,000 fans at Rogers Centre with a speech about self-confidence.

If yall know where you come from say, I slay!’ she commanded.

Unfortunately, some sort of snag with her in-ear monitor kept her from slaying the choreography from the Formation video with the rest of her dancers. It was the only obvious hiccup during the over two-hour show, but not the first moment she would spend alone.

Whereas past Beyonce tours have showcased her all-female backing band, the musicians were relegated to either side of the stage, meaning the focus was often on Beyonce and her monolithic screen.

She performed Lemonade cut Sorry to an octo-armed routine with her dancers in a single-file line and segued into an a cappella version of Kitty Kat, one of several back catalogue songs (Mine, Me Myself & I and Ring The Alarm) that were re-contextulized into Lemonades message of self-love.

The gossipy aspects of her marriage to Jay-Z were not a huge focus, but the rapper wasn’t exactly glossed over. He appeared in a montage of family footage late in the set, and much to the audiences delight, Beyonce was not above lingering on a few pointed lyrics.

The He better call Becky with the good hair line from Sorry got an extended pregnant-pause-in-the-wind-machine-moment just in case we needed to be reminded who had the best fucking hair in the Rogers Centre last night. During ***Flawless (Remix) she could barely stifle her laughter during the of course sometimes shit go down when its a billion dollars in the elevator lyric.

Formation is the newest addition to her arsenal of signature choreography routines, but the staging for Run The World (Girls) is still the most dramatic and impactful. In a rework of the Mrs. Carter Show opening number, plumes of flames shot through the air as fiery red lights flashed around the stadium and Beyonce shimmied her shoulders and whipped her hair around.

Before the Jack White-featuring Dont Hurt Yourself, the guitarist moved to centrestage to thrash out a solo, and the songs fuzzy bass line carried over into Ring The Alarm as Beyonce now dressed in a gold two-piece with puffy shoulders took a seat on a throne. The dancers reappeared in a single-file formation like her Praetorian guard. (The flaming stiletto that flew across the screen was a nice touch.)

It was one of several dazzling moments where the visuals on the giant screen melded with choreography to overwhelming effect. The all-female line dance has been a symbol of unity and a pop staple since Janet Jacksons Rhythm Nation, and the robotic dance routine synched to sound design with a militaristic snap made that connection all the more apparent.

The show vacillated between big, show-stopping set pieces and Beyonce performing solo, which recalled another trendsetting diva with an oversized, erm, screen: Kanye West and his minimalist Glow And The Dark tour extravaganza.

The screen rotated each time a new mood was introduced, though Beyonce fortunately kept the narrative journey loose, thematically grouping songs into an arc that evoked the colours black and blood-red and gradually evolved to purple, pink and blue by the shows end.

Beyonces dancing is curvaceous, highly animated and aggressive, and the same could be said of her singing. Early in the set, she paid tribute to self-love and self-confidence with Me, Myself & I, and she introduced the redemptive All Night as her favourite Lemonade song.

But she really came to life when she dropped to her knees to do ballad 1+1. She flipped her hair around and shook her head with a big smile glued to her face as she belted out note after fluttering high note. The song climaxed in a series of howling, reverby falsetto runs that took the R&B ballad into psyched-out Lisa Fischer territory.

The ballads were the best moments to actually hear Beyonce the heavy buzz of the sub-bass often drowned out the mid-range in the echo-prone Rogers Centre, but to the sound crews credit the vocals almost always sounded crisp.

She followed 1+1 with an equally impressive take on Princes The Beautiful Ones. The screen lit up purple as the original version of Purple Rain played in its entirety in tribute to the late funk icon. It was a simple and beautiful tribute that had cellphone torches glowing throughout the stadium.

Things concluded with Beyonce and her dancers splashing around in water to Freedom, Survivor and End Of Time. After all the aggressive imagery of Beyonce sneering, licking razor blades, imprisoned in glass boxes and generally looking unfuckwitable, the mood softened and, during final ballad Halo, the Rogers Centre transformed into a giant womb that birthed us all back out into the sticky-hot night.