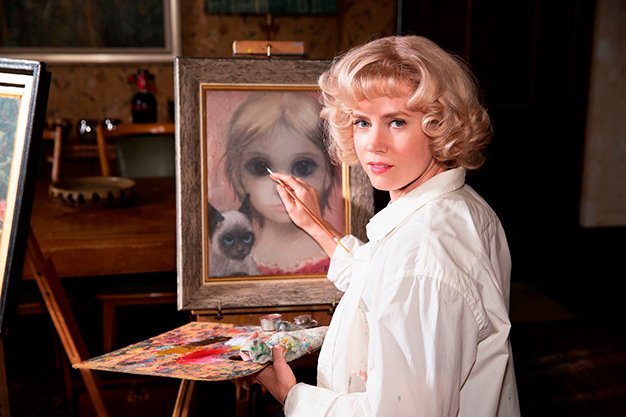 Big Eyes confirms my theory that Tim Burton just shouldn’t direct movies about human beings. His arch style lends itself to exaggeration, either magnifying emotions or smothering them in ironic artifice he’s at his best with larger-than-life projects like Batman and Sweeney Todd or the intimate fables of Edward Scissorhands and Frankenweenie.

But then there’s the outlier of Ed Wood, a slightly stylized movie about a terrible filmmaker. That project found the perfect match of Burton’s fetish for outsider artists (and Johnny Depp) in a sharp, weird screenplay by Scott Alexander and Larry Karaszewski.

Burton, Alexander and Karaszewski are back together on Big Eyes, another look at a misunderstood creative. But rather than focusing on an individual’s struggle to create, this one’s about two people – Margaret Keane, who obsessively painted sad-eyed children, and her husband, Walter, who became a minor celebrity by selling Margaret’s art as his own.

Amy Adams and Christoph Waltz play the Keanes, and they’re both very good choices. Adams imbues Margaret with a lost quality that makes it easy to understand why she’d gravitate toward the insistently charming Walter, and Waltz gives Walter a vulpine smile and a silver tongue that lets us know this is not the first time he’s sweet-talked a woman into his bed.

Burton has a lot of fun setting Margaret and Walter’s courtship and rise to fame against the hipster backdrop of 1960s San Francisco, but once the time comes to get into the story’s darker turns, he either can’t or won’t engage with them honestly. The movie becomes a cartoon with drunken lout Walter terrorizing Margaret in her studio when it most needs to explore the ugly emotional tangles it’s established.

That said, it’s still a stronger and more interesting work than Alice In Wonderland or Dark Shadows. So that’s a net positive.

Amy Adams could notch a sixth acting nomination for this, and two-time supporting actor winner Christoph Waltz might make it into that contentious category. But that’s probably everything, unless Scott Alexander and Larry Karaszewski‘s original screenplay rates a dark-horse nomination.