Bike lanes on Bloor change everything 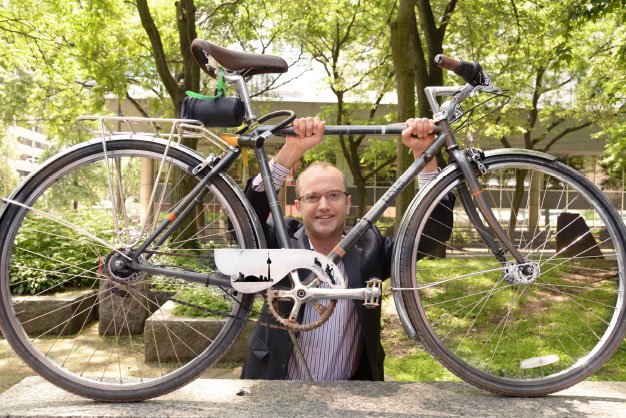 My wife, Brett, wasn’t a cyclist when she moved to Toronto, but she quickly took to two wheels and joined me on morning rides to work. As environmentalists, we both appreciate our greenhouse-gas-free commutes. We also like how liberating a bike can feel we see so much more of the city around us and aren’t confined or slowed down by rush hour.

But we don’t bike everywhere together. Like many newer cyclists in this city, Brett feels much more comfortable on streets with bike lanes. My own experience getting doored on Bathurst only reinforced her position.

Not enough of Toronto is well served by bike lanes, and, importantly, we don’t have a sufficient network of lanes to allow people to move around on connected routes.

In fact, it’s not just cyclists who don’t feel safe. Many drivers (those who don’t bike) feel uncomfortable driving beside cyclists.

But a big change is coming in that regard: a protected 2.4 kilometre bike lane separated by parking, car-door zones and flexiposts stretching from Shaw to Avenue Road along Bloor West. The project could be a game-changer for cycling in the city.

Farther south, the installation of protected bike lanes on Adelaide in 2014 has seen bike traffic along the route triple to more than 1,500 users a day, to the point where bikes now account for almost half the traffic on the street. The lanes were recently extended all the way to Parliament.

Bike lanes on Bloor have the potential to be iconic for Toronto.

Why? The street runs uninterrupted across the centre of our city. There are no streetcar tracks or rush hour bus routes fighting for space. It’s already heavily used by cyclists, and it connects to several of the most used north-south bike routes. In fact, the west end of Toronto has the highest rate of cycling in the city.

Bloor is not simply a throughway for commuters either. Outside the many businesses, theatres, grocery stores, schools and even libraries, you’d be hard pressed to find an empty ring and post to lock your bike.

Residents have been working through community organizations and BIAs to advocate for bike lanes.

A 2009 survey by the Clean Air Partnership found that 90 per cent of shoppers and patrons of businesses on Bloor West in the Annex didn’t drive to their destinations they walked, took transit or biked.

The pilot project will bring more customers to businesses along Bloor West as the number of cyclists increases.

There will be a small reduction in on-street car parking, which will alternate between the north and south sides. But this will take into account existing Green P parking lots behind Bloor, loading requirements of stores, laneway access and Wheel-Trans service requirements. Dedicated turn lanes for cars and changes in traffic-signal timing will help ensure car traffic continues to move along the corridor.

The city has carried out a long consultation process. Local residents’ associations, BIAs, cultural organizations, schools and advocacy groups have participated in planning sessions. We’ve held two large and well-attended public meetings, and more than 2,000 people have filled in the city’s survey about the project.

The proposed pilot project has strong support in the community from residents and businesses.

The project will head to the Public Works and Infrastructure Committee and then city council over the next two months. If it passes council, we’ll install lanes late this summer – and I’ll invite you to ride with Brett and me at the opening.

Mike Layton is the councillor for Ward 19, Trinity-Spadina. Sign the Bloor Loves Bikes pledge at cycleto.ca.