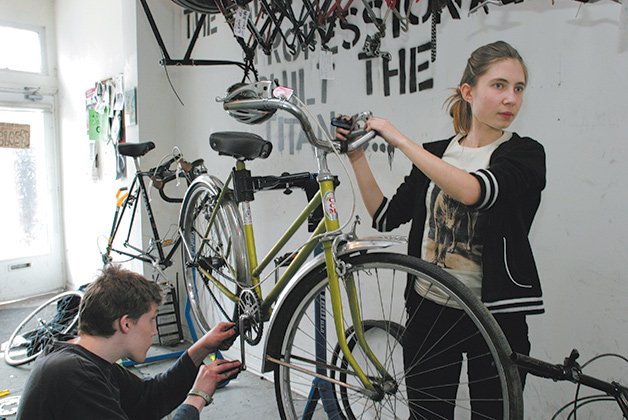 These are just a few of the reasons why the folks at community cycling organization Bike Pirates have decided it’s time to say goodbye to the spot on 1292 Bloor St. West that they’ve called home for six years and move to a bigger, more accommodating space. This past Sunday, they launched an Indiegogo campaign with the goal of raising $20,000. So far, they’ve received more than $1,300 in less than two days.

The Pirates plan to make the move in January, and they’re close to announcing a new location, though they won’t say where they’ll be setting up shop just yet. Their last operating day in the old space will be December 7.

“We outgrew the space about two years ago,” explains Ainsley Naylor, a Bike Pirate volunteer with seven years of experience under her belt. Bike Pirates provides tools, bike stands and training so that cyclists can built and repair their own bicycles, and their services are increasingly in demand.

“We were operating way beyond our capacity and it got difficult to have a great experience in a space that was so cramped,” says Naylor. One of the big reasons they’re moving is so that they can remain a space that anyone can access.

“Because it’s so busy and full of stuff and people, it can be hard to keep things open enough to be truly accessible for wheelchairs,” says Naylor. They’re also planning on starting up ASL nights with workshops offered in sign language.

Money raised from the fundraising campaign will go towards the initial whack of rent money it will take to procure a new space, and to buying the sorts of things that Bike Pirates has always gone without.

“It would be great to have a stove with four working burners,” says Naylor.

There are some fun rewards up for grabs for those who pitch in to the campaign, and Naylor says that new prizes from other members of the community will be posted to the Indiegogo site later this week.

Just as important as the cash is getting the message out that — contrary to some confusing rumours — Bike Pirates is not shutting down, they’re just moving to a better space.

Says Naylor: “It’s not just about raising money it’s about keeping people in the loop about what we’re doing.”

An earlier version of this story erroneously stated that Bike Pirates fundraisers aim to raise $60,000, not $20,000.