In yet another change of course for Toronto's forever-in-flux bike share system, a group of New York-based investors with deep. 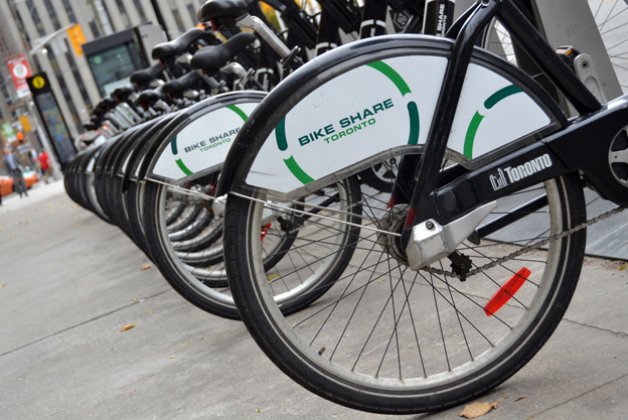 In yet another change of course for Toronto’s forever-in-flux bike share system, a group of New York-based investors with deep pockets and transit expertise is taking over the operation of the program formerly known as Bixi.

Bikeshare Holdings LLC announced last week it has reached a deal to buy Alta Bicycle Share, the Portland firm that has been operating Toronto’s cycle share program since April. The city brought Alta on board after the Toronto Parking Authority took over the money-losing Bixi system last year, in a deal that also saw the programs name changed to Bike Share Toronto.

The purchase, expected to close by the end of the year, will result in a new company that will run Toronto’s system as well as the nine others Alta operates in cities across North America and Australia.

Exactly how the takeover will affect Bike Share Toronto remains to be seen, but TPA spokesperson Marie Casista believes it’s a good thing.

We view it quite positively, she says. The new company will have a solid core of senior management expertise that Toronto can call on if necessary.

Providing some of that expertise will be the new company’s incoming CEO Jay Walder, who has extensive experience in the transportation sector, having previously served as the CEO of public transit systems in New York City and Hong Kong. Walder brings a pedigree that was lacking from Alta, which began as an offshoot of a transportation design firm. Some observers felt its management failed to keep up as its bike share programs spread rapidly across North America.

The various bike share programs Alta operates have different business models. In New York, where the company owns the Citi Bike system, the takeover will result in a $100-million funding injection that will see the program double in size to 12,000 bikes and 700 stations by 2017.

In Toronto, where the city owns the system, that kind of investment and expansion won’t happen.

But Scott Hancock, Altas general manager for Bike Share Toronto, predicts that the New York parent company will improve operations here by centralizing some managementfunctions, creating marketing strategies that can be road tested elsewhere before being rolled out in Toronto, and developing new technology to better manage a constantly moving fleet of bicycles more efficiently.

Dani Simons, a spokesperson for the New York company, says that Bike Share members may not notice any change in the short term, but in the long term term “the new investors are committed to fixing the technology that powers the bike share systems as well as enhancing the management of all Altas programs.

“There’s a vision for this being a really modern company in keeping with the fact that [bike share] is the new, modern piece of the urban transportation network,” Simons says.

The new company will certainly have the money to invest in bike share technology. Financial heavyweights involved in the venture include Harvey Spevak, the CEO of the Equinox gym franchise, and Jeff Blau, the CEO of real estate giant Related Companies.

The takeover of Alta marks another turning point for a fledgling industry still trying to find stability. While bike share programs have proved popular, high ridership doesnt necessarily translate into high profits, and in many cities operators have struggled to find a reliable business model. In March, Montreals mayor warned that citys Bixi program might not survive until 2015.

This year, bike share operations across the continent were hit by a shortage of replacement parts for bikes and docking stations after the main supplier, Montreal’s Public Bike System Company, declared bankruptcy in January.

Hancock says those problems have been resolved thanks to the April purchase of PBSC by a Quebec businessman. Bike Share’s shop at Dundas and Broadview is now overflowing with replacement parts the agency received 700 chains, 200 seats, 300 wheel sets and 400 cranks in the past few weeks, and its three mechanics are hard at work refurbishing the fleet of 1,000 vehicles.

They’ve also been fixing docking stations, many of which needed to be repaired. As of this week, Hancock says only three of Bike Share’s docks are out of service, compared to 80 at the height of the maintenance problems.

Bike Share Toronto continues to grow, and now has 4,023 members, up from 3,544 in August last year. But that’s still well short of the 6,000 memberships some cycling advocates believe are needed to make the program financially viable. Bike Share is hoping to add more stations next year, and is rumoured to have secured a new corporate sponsor to help finance it.