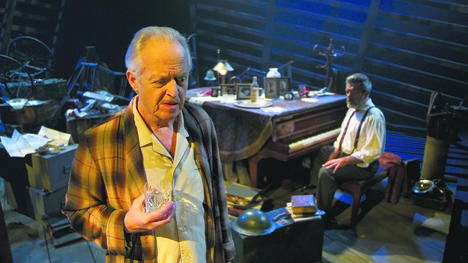 Billy Bishop Goes To War, based on the recent Soulpepper production of John Gray and Eric Peterson’s 33-year-old musical about the Owen Sound-born WWI flying ace, fails to soar the way it does on stage. But it’s a worthy document of a Canadian classic.

Director Barbara Willis-Sweete doesn’t disguise the fact that the two actors are in a theatre. Gray sits at the piano and delivers backup vocals, while Peterson, as expressive as ever, fleshes out more than a dozen characters with the help of a prop or two. The live show’s sound design has been subtly enhanced, and Willis-Sweete employs film footage (some archival, some made to look it) to lend context about the war. One bold addition in the film’s final moments is too powerful to give away.

Peterson remains as spry and engaging as ever, morphing believably from the couch-ridden older Bishop to his naive younger self, a genteel British bureaucrat and an upper-class dowager. Still, some of the performance loses its magic in 2-D theatre lets you use your imagination more.

What makes the film so moving is that Peterson and Gray are approximately the same age Bishop was when he died, so the piece becomes not just a meditation on survival during war but also among friends, artists and audiences.