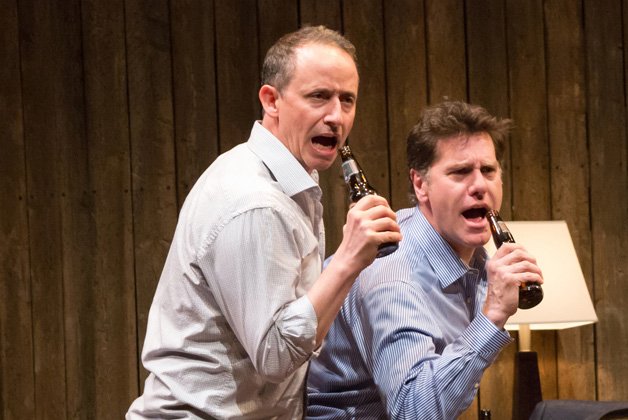 Anecdotes and the occasional aside give glimpses of their rich childhood mythologies (including how the characters got their nicknames) and what’s happened to everyone in the three decades since graduation: who’s left town and who hasn’t, who’s married and who isn’t, who’s happy and who’s missing something in their life.

The two groups eventually meet up at the bar and then return to the guys’ hotel room for a booze-fuelled after-party, where playful ribbing and a hilarious singalong descend into emotional turmoil as personal secrets bubble to the surface.

The central question animating this mid-life meltdown is whether their best years are behind them. Doug, who’s amassed all the trappings of middle-class “success,” thinks they are. But in a moving aside – one of the show’s few serious moments – Kathy convincingly argues that the best could be yet to come.

Director Nigel Shawn Williams provides a few nicely placed flourishes for comedic effect that never feel over the top. Fluid transitions between monologues and the main action are a subtle testament to his steady hand.

Bingo! won’t be counted among MacIvor’s classics, but it holds its own as an entertaining, effective think piece, especially if your high school memories include rocking out to hair metal on old cassette tapes.