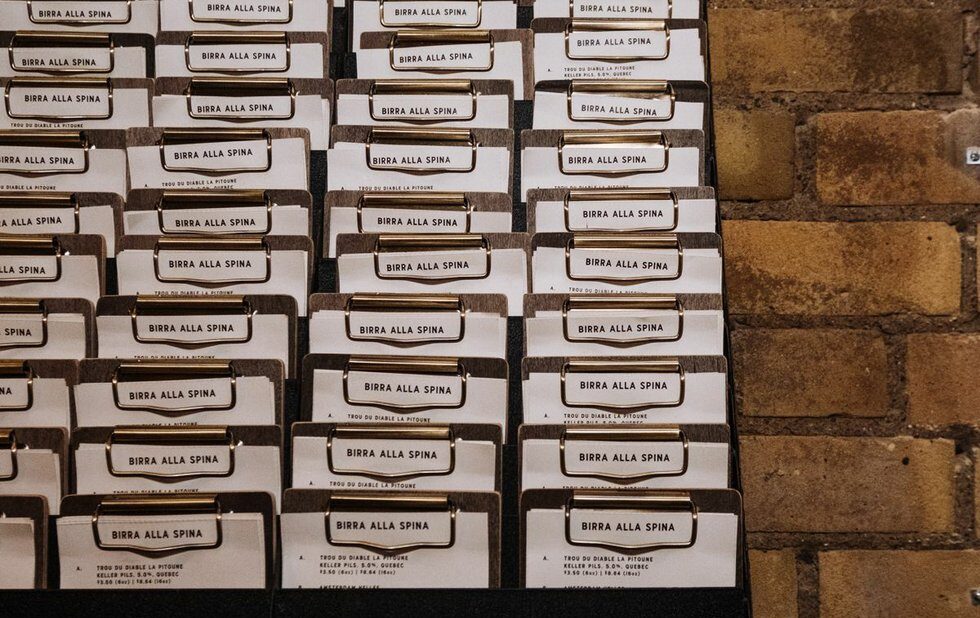 Though there are parallels between the old and the new 26 taps pouring the citys most exciting beer, a tight but formidable beer cellar, shareable nibbles Birreria is a decided departure from its legendary parent bar.

A sleek assemblage of concrete and stainless steel, wood, brick and marble with splashes of art and greenery, the slender L-shaped alleyway bar (formerly Souz Dal) keeps an attentive eye on the Old World while confidently spearheading the new.

We wanted to create a space that challenged what it meant to be a beer bar, says Tomas Morana, who opened Birreria with his father, Ralph, and brother Julian.

With Birreria, we envisioned something more stylistically focused, a gateway for the next generation of beer drinkers.

Considering the vibe and inventory, the Moranas have already achieved their goal in spades. Drinking beer here is an experience you wont find anywhere else in the city or in Canada, for that matter. No ice or clunky glassware clutters the bar. Sour and spontaneously fermented beers are the focus, and Birreria helps you appreciate their funk-laced aromas and intricacies by serving them in proper stemware.

The tap list, which Morana laughingly refers to as selfish, is a brilliant, constantly changing lineup of local and imported brews, some of which have never been poured in the country before.

During my visit, the list offered treasures from cult breweries like Belgiums Cantillon and Maines Oxbow, which brews gose-inspired Saison DellAragosta with live lobsters in collaboration with Parmas equally cultish Birrificio del Ducato.

The draft lineup is impressive, but Birreria really gets interesting once you start flipping through the bottle list. Given the Moranas heritage and the bars location in the belly of Little Italy, its not surprising that theyre passionate about new-wave Italian beer.

The small but jaw-dropping cantina is stocked with bottles from LoverBeer and Birrificio del Ducato, ultra-cool Italian breweries that ferment with wild yeasts from grape skins to make what have been dubbed Italian grape ales.

Bottles from terroir-focused farm breweries like Denvers Crooked Stave and Almanac in California are on the way.

Perhaps Birrerias most radical feature is that it offers its cellared beer by the glass, allowing patrons to try some of the houses unique brews without having to commit to an entire bottle. And these tart and layered brews often mirror wine in flavour as well as service Birreria is showcasing an exciting interplay thats developing between the beer and wine worlds. Though the bar currently pours a local red and white on tap, the Moranas hope to start serving a selection of natural, biodynamic and orange wines come winter.

If someone can appreciate a nice gueuze or Italian grape ale, I think it goes hand in hand with enjoying natural and biodynamic wines, Morana explains.

Brewers are making beer that can be appreciated in the same way as a glass of wine, but I havent seen a beer bar thats crossed that line yet.

Dont overlook the spuntini selection, which includes Italian snacks like lupini beans ($4), melanzane ($6) and tinned sardine ($14) along with more substantial portions of fried chicken from P.G Clucks next door.

The venue and concept differ from the original Bar Volo concept, but its clear that any Volo venture will remain on the cutting edge of Torontos beer scene. In that sense, not much has changed after all.

Hours Tuesday to Sunday 5 pm to 2 am. Check website for updates.

Accessibility No barrier at door, washrooms on same floor.

See listing. Looking for more bars? Check out our database of restaurants and bars here.