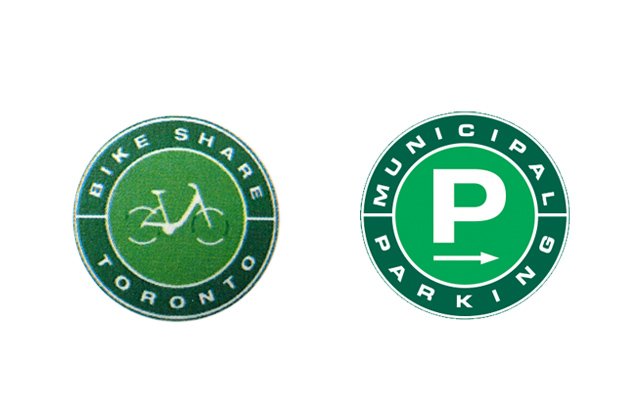 Bike Share Toronto's new logo next to that of the Toronto Parking Authority.

Bixi Toronto will have a new name, operator, and prices starting Tuesday (April 1).

The beleaguered but beloved public bicycle system will simply be known as Bike Share Toronto, with a green, circular logo mimicking that of the Toronto Parking Authority, which was put in charge of its infrastructure late last fall.

The TPA has chosen Portland-based Alta Bicycle Share, which runs systems in New York, Chicago and other cities, to manage and operate the program. The new branding will roll out across bikes and stations over the next several weeks, says Marie Casista, the TPA’s Vice President of Real Estate, Development and Marketing.

“We’re very excited about it,” says Casista, “because we feel that Bike Share Toronto, formerly Bixi, plays a major role as a transportation vehicle for the City of Toronto and [its] residents.”

Meanwhile, the TPA is “still working very diligently toward finding a corporate sponsor” for the program, says Casista, who’s looking for “somebody big, somebody where a naming sponsorship makes a lot of sense for their business and kind of aligns with what we do at Bike Share Toronto.”

Although the naming rights could be sold, the new logo will remain, she says.

Bixi Toronto was previously owned and managed by the Public Bike System Company, a private business established by Montreal’s parking authority, which filed for bankruptcy in January.

The changes will be officially announced on Monday.