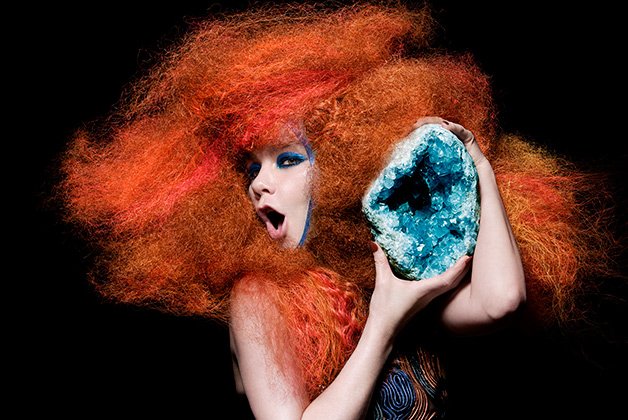 The original project launched in 2011 was a groundbreaker. It was the first ever “app album,” its 10 tracks accompanied by interactive visual content that was incorporated into the live show and enhanced in the film. And while this doc was shot on the tour’s last leg, staged in the round at London’s Alexandra Palace, early live incarnations unfolded in museums around the world.

You can see why. Biophilia is really an art extravaganza. Bjork herself looks like an art object, crowned by a mammoth orange wig, her face ringed in blue paint, and clad in a dress that makes her look like slime out of a Cronenberg film.

The show features unusual instruments – gravity harps, a celesta, to name a few – and adds more psychedelic and CSI-type representations of nature in action to the original visuals. The music is a mind-boggling mashup of unsettling atmospherics, dark melody and electronica, all anchored by Bjork’s soaring vocals and backed by her superb 24-women choir, Graduale Nobili.

But for all of Biophilia’s arty sci-fi weirdness, the powerful emotion in the songs themselves is what stays with you.

Whereas the watershed pic Woodstock (See Top 5, this page) gleefully pans over its audience, Biophilia shows no interest in who’s lapping up the performance. And unlike Heima – featuring Iceland’s other glorious export, Sigur Ros – the film offers no behind-the-scenes action or insights into the star’s creative process, small but significant weaknesses. But it’s a pic that deserves to find an audience beyond Bjork’s fan base. Listen to the last song, Declare Independence, and appreciate Bjork’s punk roots. This woman can do anything.