Sadly, the ongoing rhetoric of having come so far has numbed many white mainstream queers into passivity 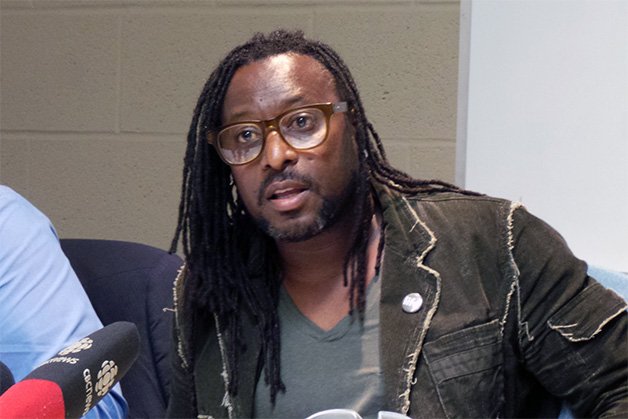 Rinaldo Walcott says it's because our definition of Canadian stories is too narrow that so few Canadian Black writers, with the exception of Dionne Brand, Lawrence Hill and a few others, are well known.

When Pride announced that BLM-TO would take this role, many of us responded cynically, assuming the LGBT organization was being disingenuous. In the days since the parade, it’s becoming clear that our cynicism might not have been misguided.

As is nationally and internationally now known, BLM-TO held up the parade for about 30 minutes to ask Pride to publicly sign a set of demands that would more firmly place Black Torontonians and other marginalized communities at the centre of the festival.

They ask for solid financial support for the Blackness Yes group who stage Blockorama, and for a central and fully supported stage for Black Queer Youth. Additionally, the group wants Indigenous, Black and trans people and those living with disabilities to have better access to paid positions within the Pride organization. They also demand the return of the South Asian stage and the removal of police floats from the parade. This last demand has overshadowed all the others.

Pride and BLM-TO’s detractors have failed to mount valid arguments against what appear to be justifiable demands. These may be hard to muster given that Pride continually prides itself on breaking down barriers.

How can Pride legitimately exclude the large South Asian community whose influence is strong in politics across the nation, the province and the city?

How can Pride legitimately resist the opportunity to employ some of the most marginalized in our community?

How can Black queer youth be denied full participation in the festival?

The demands of BLM-TO are firmly of the current political moment of “valuing diversity” in employment, entertainment and community organizations.

So how might we make sense of Pride’s refusal to acknowledge that the overwhelming presence of police marching in the parade in full regalia inhibits inclusion?

The argument for police participation is based on misconceptions.

One is that inclusion means we all can and do have the right to participate in the Pride parade. Nothing is further from the truth.

Pride has in the past and will in the foreseeable future debate and impose restrictions on who marches. It’s not a free-for-all. Parade marchers must fit a certain values test, and as it stands currently, policing organizations fail that values test due to their mistreatment of trans, Indigenous and Black people (youth, in particular) and sex workers. These groups are all a part of the LGBTQI community Pride claims to represent.

Police presence in the parade obscures the work that still needs to be accomplished and whitewashes our history with them.

The lie that policing organizations have radically reformed their relations with queer folks is enacted by their overwhelming presence in the parade.

To remove police floats is not to act against inclusion but, rather, to say that inclusion matters and must be earned.

Another and crucially important misconception is that the parade is a universal celebration of the ultimate achievement of queer rights in our society.

While great strides have been made, many marginalized queer people remain fully without the rights we so giddily talk about.

It’s sadly obvious that many white mainstream queers have been numbed into passivity by the ongoing rhetoric of having come so far. This rhetoric has kept many from noticing some of the most urgent political questions of our day.

The “regret” negotiated recently by Rev. Brent Hawkes from Toronto police for the 80s bathhouse raids clearly did not include an apology to elements of the queer community still experiencing repression at the hands of police.

How Pride gets to speak for us is central to this debate. Policing and its practices sit at the centre of those urgent questions.

From surveillance to questions of privacy, use of public space and policing the poor, modern law enforcement in numerous ways, including the ongoing criminalization of HIV transmission, impacts queer life.

Some white mainstream queers do not understand their support of the police in the parade as an amnesiac response to their own history of exclusion.

Their insensitivity to contemporary struggles after all the rhetoric of being able “to love who you want” (a phrase that suggests it is love rather than sex that marks our outsider status in the first place) is a fundamental part of the problem.

BLM-TO’s Pride protest has steered the conversation back to deeper and more important, even philosophical, questions of queer life. We need to meditate on them. Those questions, when honestly confronted, demonstrate that BLM-TO’s demands should be met posthaste.