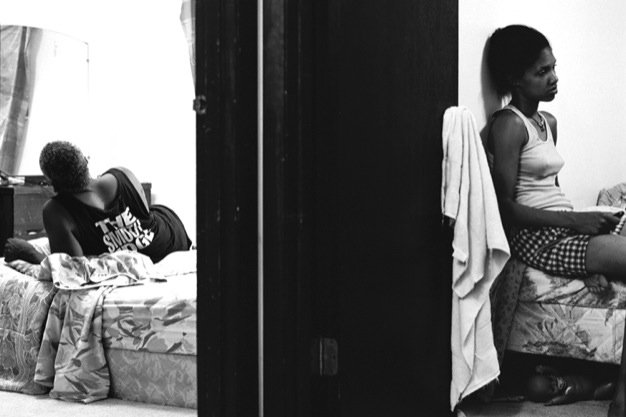 LaToya Ruby Frazier's Me And Mom's Boyfriend Mr. Art is in The Notion Of Family.

The Notion Of Family,* LaToya Ruby Frazier’s searing 2014 photo book, builds on the legacy of A Harlem Family by Gordon Parks, part of the AGO’s Outsiders show. On the show’s closing weekend, Frazier comes to the AGO to talk about Parks.

Parks’s 1968 Life Magazine photo essay about the Fontenelles, a Black family living in poverty, told a shocking story rarely before seen in the media. Frazier’s book, a history of her family and rust-belt hometown, Braddock, Pennsylvania, tells a more recent story of poverty and resistance, made more powerful by her passionate first-person perspective.

“My family happens to be a springboard for talking about bigger issues of class, health care and environmental racism,” Frazier says on PBS’s Art21 in 2012. “I have to tell my story because it hasn’t been told. I’m a human being and my life has value. I refuse to be erased.”

When she was a teenager, the artist (now in her mid-30s) started photographing herself and her family. “People think that people struggling economically don’t add value to society,” she says. “It became about making a family album of images, day to day, to defy what I see in the media. I was combatting stereotypes of someone like my mother and me, who are often depicted in the most dehumanizing way – as poor, worthless or on welfare.”

Reacting against photographers who make images of the poor for an elite audience and who silence their subjects – as Dorothea Lange did Florence Owens Thompson, the subject of Migrant Mother – Frazier began collaborating with her own mother. Her family members often confront the camera as they deal with illnesses related to their exposure to pollution from the steel mills.

Political context comes from shots of the depopulated town and aerial photos of industrial sites. Pointed text narrates Braddock’s devolution over four generations from bustling working-class hub to devastated community after plant closures, white flight and the war on drugs.

Frazier’s talent for bringing many levels of commentary to a single image is evident in a 2008 photo called Huxtables, Mom And Me, owned by Kenneth Montague of Wedge Curatorial Projects, which hangs in the Counterpoints show at the Art Museum at U of T. The local collector and friend of the artist says Frazier “represents the Black American voice, the woman’s voice and a voice of power for neglected people, period, but certainly for poor people in America.”

*Aperture is publishing a paperback edition of The Notion Of Family in October until then, see it at the Toronto Reference Library.