As easily as she put on the rainbow cape, she took ownership of the superpower in the colour of her own skin 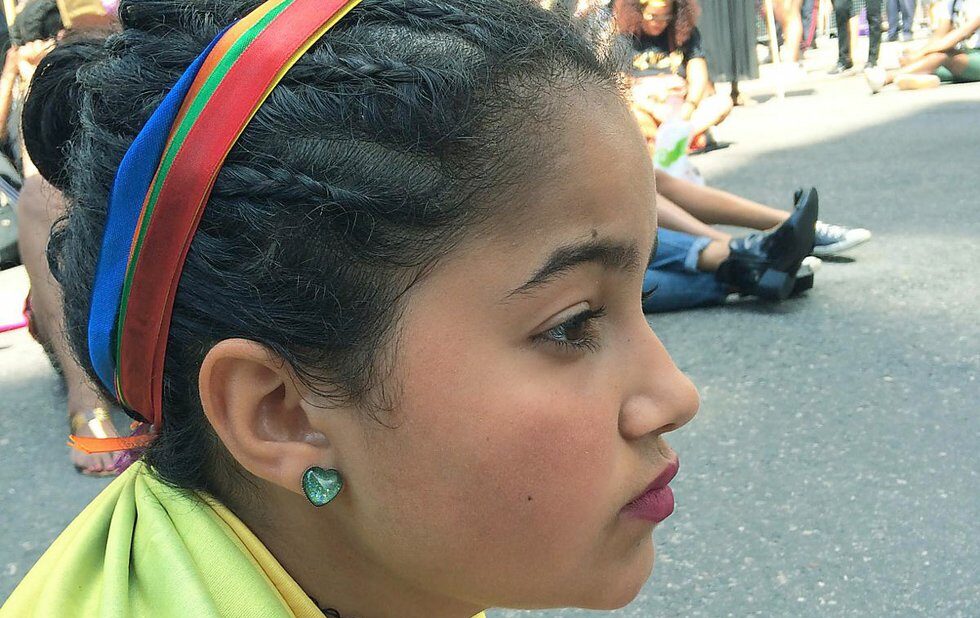 For the last few weeks, as individuals and a city, we’ve been trying to figure out what the Black Lives Matter sit-in at the Pride parade meant.

As someone who sat on the ground as part of the circle that halted the parade, I formed some opinions quickly.

Was it okay to interrupt a parade that was meant to celebrate the LGBTQ2S community? Ultimately my answer was yes, though in truth, I was initially conflicted.

When given the chance to be an ally, to put aside my own confusion and put my own body on the line, did I feel we were being put in danger? No, because I realized that the colour of my skin was a shield, most likely protecting me from the aggression that might have ensued had it not been such a public setting and the protesters not such a diverse group of people.

In the days that followed, I reflected on the big-picture meaning: issues of equity and inclusiveness at Pride and in our city, police accountability, privilege and the oppressive systems that uphold it, and acknowledging that it’s time for those who benefit from those systems to change them. Underneath is the discomfort of the question “What am I going to do about it?”

When Black Lives Matter appeared on the cover of the July 14 issue of NOW, the meaning of it all hit home.

There, seated in the bottom corner looking as mad as hell, was my 13-year-old stepdaughter, Alicia.

To those who know her personally, Alicia is many things: creative, compassionate, trustworthy, thoughtful, playful. To those who are looking for boxes to check, she identifies as an Afro-Brazilian-Canadian cis-gendered pansexual female.

When her mom and I started dating, Alicia and I immediately found a connection in art and music, and over the years we’ve strengthened our relationship through shared understandings and ways of being in the world. Still, I’ve remained conscious of the fact that while she and I may easily see ourselves in one another, society does not. She will always walk in the world a person of colour, and I will never truly know what that feels like.

As she’s continued to define and redefine her identity, her intersectionality causes me to rethink what once appeared to me as straightforward solutions. The challenges she’s presented with as a queer biracial teen growing up in Toronto are very different from those I faced as a straight-identifying white teen growing up in Manitoba.

So while I can set an example for her by striving to be the best version of myself possible, I cannot be a Black role model for her.

Having marched in front of our drumming group at the Dyke March the day before, Alicia was already prepared to parade proudly and confidently.

Donning a rainbow cape, Alicia immediately recognized that there was a problematic disconnect between the Black Lives Matter folks up front and the sound of our group behind them. It was really challenging for us to hear them, and therefore difficult to stay together rhythmically.

Alicia, remembering the chants from our participation at the BLM rally at police headquarters in the spring, took up the role of intermediary, listening closely to the BLM chanters, then turning to shout the response back at us, using her body to mark the time.

As we moved through a minute of silence for the Orlando victims into a semi-circle that made a makeshift stage for BLM leaders, Alicia participated with an unwavering poise.

Unlike many of our adult group members, not once did she express annoyance, frustration, doubt, confusion or a desire to leave. She applauded for, chanted with and listened to the leaders of BLM-TO, and while she respectfully stayed close to her mother as we requested, she consciously put herself at the command and service of these beautiful, strong, queer Black women who were dressed like the bosses they intended to be.

In the middle of Yonge and Carlton, Alicia looked into the face of some of her own intersections and was inspired by what she saw.

A day or two later, while her mom and I were working, Alicia filled our household “gratitude wall” with statements.

She wrote about the safe space we have and strive to uphold in our home, the freedom she has to explore her own identity without judgment and the value she places in her own well-being because of the value we place in her well-being.

She thanked me personally and specifically for the ways in which I play a parental role in her life. She asked me if I’d prefer if she called me “Mom,” saying that in her heart, my name was synonymous with the idea of mom, but she wondered if the title mattered to me.

Growing up in a family and community of artists, activists and allies, Alicia has certainly had many positive role models, adults who are not only working to be true to their own selves but also willing to interact with her as a peer and equal to bear witness to the self she is uncovering.

But as the slick, polished flow of the Pride parade went up in a cloud of thick rainbow smoke, Alicia saw clearly queer Black women who were advocating for themselves, their families and their communities, and for other marginalized communities whose needs and challenges intersect with hers.

She saw super-heroines who are leading a movement of change, who are in a position of power, who, despite the fact that they’re mad as hell, are eloquent speakers, stating clearly the problems and proactively demanding solutions.

She saw people whose identities intersect with her own on many levels speaking up and acting out in thoughtful, non-violent and effective ways. And as easily as she put on the rainbow cape offered by our friend Martha, she effortlessly took ownership of the superpower within the colour of her own skin and immediately put it into practice in her own life.

So as we move forward from this defining event, I will continue to ask whether we have arrived at a place where we can all feel safe and proud. I will continue to seek answers to the question, What am I going to do about it? I will continue to put my white body on the line and raise a loud noise for the statements and demands of Black Lives Matter.

As for the question, Did it mean something?, I am blessed that I get to share my home with someone who reminds me that the answer is a resounding yes.

Carlie Howell is a multi-instrumentalist, composer, digital creator and artist.