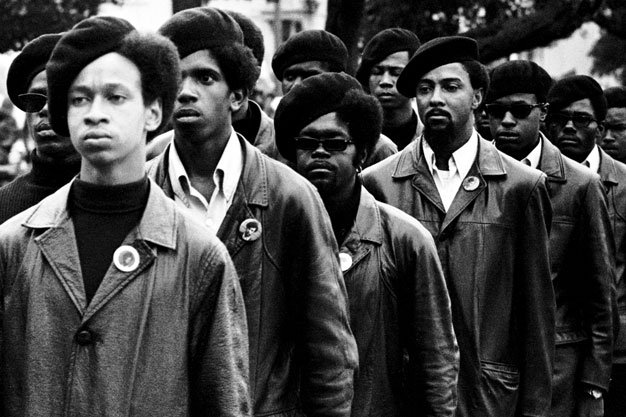 Still from 2015 documentary The Black Panthers: Vanguard Of The Revolution.

It just so happened that the 50th anniversary of this year’s Super Bowl played last weekend in San Francisco coincided with the founding of the Black Panther Party for Self Defense in the U.S.

In what must surely be a warping of the space-time continuum, on the field in this year’s contest was a team called the Panthers led by a fellow named Newton, (who is no relation to Huey P. Newton, one of the six original founding members of the Black Panthers).

And then there’s Toronto Councillor Jim Karygiannis, seemingly oblivious to the significance of certain events in black history, who says the Government of Canada should investigate Beyoncé for her halftime performance. Beyoncé and her dancers wore costumes and berets referencing the Panthers during a performance that included the Black Power salute that Tommie Smith and John Carlos gave when they won Olympic gold and bronze in the 200- metre race at Mexico in 1968.

Karygiannis claimed during a February 9 interview with the CBC’s Rosemary Barton on Power & Politics that Beyonce’s performance promoted “gun culture” and “anti-police” sentiment.

Karygiannis said that Beyoncé or her dancers should not be allowed entry to Canada if any of them have given financial support to the Black Panther Party, which he called a “hate group.” But he never did answer Barton’s question.

Instead, Karygiannis read from what seemed hastily-prepared notes to offer a mangled, confused and extremely ahistorical account of the Black Panther Party. Karygiannis said Canada should consider putting the party on Public Safety Canada’s list of terrorist groups.

But which party? The the original Oakland-based BPP disbanded around 1982. The Dallas, Texas-based New Black Panther Party, which Karygiannis admits “is not an official successor” could not possibly be the group Beyoncé was acknowledging. It’s the latter that the Southern Poverty Law Center has labelled a “hate group.”

Karygiannis cited the case of former British MP George Galloway who was banned from entering Canada in 2009 because Galloway took part in the delivery of humanitarian aid to Palestinians in Gaza which was construed as giving aid to Hamas which governs the region. What Karygiannis didn’t say is that Galloway was eventually allowed to enter Canada after a federal judge overturned the original ban.

More to the point, prominent on Public Safety Canada’s list since April 2006 is the Liberation Tigers of Tamil Eelam (LTTE). In 2005, while a federal MP, Karygiannis made a trip to a region of Sri Lanka controlled by the LTTE. He said the trip was to see if relief supplies in response to an earthquake were reaching the area. But it seems a stronger case can be made for Karygiannis giving material support to a terrorist entity than Beyoncé.

It is truly bizarre, but not altogether surprising to see Karygiannis acting like a classic anti-black demagogue and relying on well-worn, fear-mongering to try and link Beyoncé to “terrorism.” As a former federal critic for multiculturalism Karygiannis has been accused uttering racial slurs in the past.

His remarks are the same kind of perversion that drove former Conservative MP Rob Anders to call Nelson Mandela a terrorist in 2001. Both former U.S. President Ronald Reagan and British Prime Minister Margaret Thatcher also labelled Mandela a terrorist. Yet, the African National Congress and the Black Panther Party for Self-Defense were organized as a response to the notoriously brutal and violent terrorism of apartheid and Jim Crow, manifestations of which continue to this day for many.