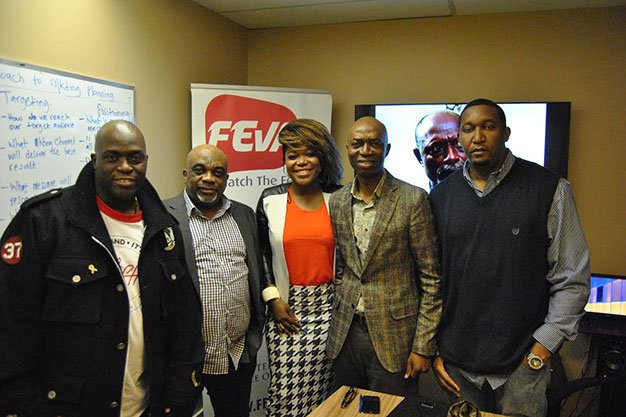 Last month, we published a story about G98.7’s Fitzroy Gordon, who said he was launching the first national television station focused on the black Canadian community.

Gordon was granted a broadcasting license for television by the CRTC this summer. The channel, to be available by fall 2015 at the earliest, is to be styled like Black Entertainment Television (BET) in the United States — a general interest hub with news and cultural content.

The problem is, the founders of the First Entertainment Voice of Africa (FEVA TV), say they already accomplished that. Launched in August, FEVA imports music, documentary and news content from filmmakers and artists from Africa, Europe and the Caribbean. The channel is available on Rogers and FIBE TV as a premium channel, and has a small but growing subscription base.

Gordon says he has not had any interaction with FEVA TV. He says he did not even know of FEVA TV until June of this year after re-establishing contact with AfroGlobal, a different television station that, despite receiving a CRTC license, has not started broadcasting yet.

At least six years ago, Gordon and Farley Flex, one of FEVA’s pitch men, started to work on an agreement to market G98.7 on AfroGlobal, and vice versa. Part of that agreement bound Gordon to work only with AfroGlobal and not any competing entities.

When Gordon was ready to pursue television development, he hadn’t spoken with Flex in some time. He says he thought FEVA and AfroGlobal were the same, and then learned Flex was actually with a separate entity.

He advised his team to cease any dealings with FEVA TV, fearing the original agreement with AfroGlobal would be null and void.

FEVA TV ‘s board says they since contacted Gordon’s people, looking to market their channel on G98.7, Gordon’s radio station.

Robert Onianwah, an investment advisor developing the station, says Gordon stated he didn’t want to work with FEVA TV at the moment, and that “he left it open.”

Flex, a Canadian music industry notable and FEVA TV’s senior vice president of business development, thought the behaviour was similar to Gordon’s development of G98.7FM, where some thought Gordon was downplaying the importance of FLOW 93.5, the first black-owned and operated radio station in Canada.

“When you look at a Denham Jolly [FLOW’s founder], who is an institution in the black community, and anyone who is audacious enough to discount the importance of the 12-year struggle to get FLOW on the air,” Flex explains, “it doesn’t matter who owns it now, it’s about who brought it here. I just want it to put it out there as, ‘What’s going on, bro?'”

To this day, Gordon stands by his claim of having the first black Canadian-focused station.  Gordon perceives FEVA to be an entertainment-only channel that focuses beyond Canadian borders. FEVA disputes this, that their programming brings perspectives of the black diaspora to the Canadian market.

“We are licensed to carry programming for the Black and Caribbean populations of Canada, like Family Channel, CTV, CBC or Global,” says Gordon, who is trying to appeal to a mainstream flavour. He applauds FEVA TV for their different approach to their channel.

FEVA TV is offering cultural programming from a broad spectrum of black experiences — African, Caribbean and otherwise. They are developing more and more original programming and are looking to try different things as their subscription base grows.

Regardless, there has been confusion and miscommunication between sides. FEVA TV’s representatives say they are open to working with Gordon in the future.