BLISS by Olivier Choiniere, translated by Caryl Churchill, directed by Steven McCarthy (Candles Are For Burning/Buddies, 12 Alexander). Runs to. 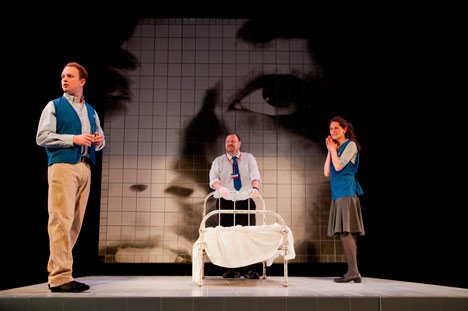 Quebec playwright Olivier Choiniere takes the cult of celebrity down a long, dark tunnel in the ironically named Bliss. It’s a challenging script, but in the hands of director Steven McCarthy and his cast, the production offers both chills and surprises.

At its centre are two women, the much-lauded Celine Dion and the lesser-known – except in Quebec, where her story was a tabloid feast much like Celine’s – Isabelle Cote, held captive for years in her home until shortly before her death by cancer at the age of 22. Each knows personal tragedy: a miscarriage in the former case and repeated sexual abuse by family members in the latter.

A group of Wal-Mart employees (Jean Robert Bourdage, Trent Pardy and France Rolland) relate the details of the women’s travails, details that, during the telling, start to blur together in a fascinating manner. The stories are orchestrated by a figure named the Oracle (Delphine Bienvenu), who corrects minutiae in the trio’s reportage. Eventually the employees do more than recount they become Celine and Isabelle’s family members as well as part of Celine’s entourage.

McCarthy skillfully shapes the text’s rhythms and choreographs the action on James Lavoie’s antiseptically white set. The director creates an intentionally gushy, stylized tone at the start, as Celine steps down from the concert stage in order to have a family with her husband Rene.

That picture darkens as Isabelle’s life intrudes on that of the idolized Celine. Isabelle is the singer’s biggest fan Dion’s images, newspaper articles and recordings help keep her alive as she lies chained to her bed. Over the course of the show, Choiniere provides a carefully designed devolution from Celine’s luxurious desert mansion to Isabelle’s lower class home.

A narrative twist near the end adds a third world to the two we’ve been watching and allows a minor character to become a major one.

Bliss traces a journey of isolation and loneliness, of fantasy and fixation. The play won’t be to everyone’s taste, but this carefully shaped production touches the emotions in a deliberately disturbing manner.