Study of major cycling project was supposed to start last fall, but city staff quietly put it on the back burner 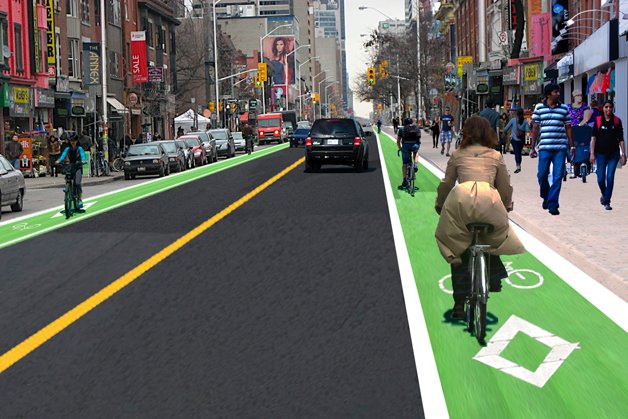 Cycling advocates rejoiced fifteen months ago when council approved a study of bike lanes on Bloor.

The major east-west thoroughfare is heavily trafficked by commuting riders, and cycling advocates have long argued it’s a logical place for a bike lane. In November 2013, the project seemed a step closer to reality when councillors voted 30-3 to commence an environmental assessment that would look at installing cycling infrastructure along a 7-km stretch of the road, from Keele to Sherbourne, as well as a portion of Dupont.

But while work on the assessment was supposed to start in fall 2014, it never did.

Despite the explicit direction from council, city transportation staff revealed in a briefing note that went to the budget committee on Friday that they had quietly deferred the project.

According the report, the department “was unable to commence” the assessment because it had to accommodate other work, including the Richmond – Adelaide bikeway pilot project and “a large push for a host of other on-street cycling facilities.”

The department now plans to do a “preliminary feasibility exercise study” this year to evaluate potential design options for bike lanes on Bloor, with an eye to doing a pilot project on at least part of the street in 2016. The pilot could be followed by an environmental assessment for a permanent lane, but ultimately the assessment may not be necessary. The province is expected to amend the criteria for doing EAs in the coming months and the bike lane project may be exempt.

Councillor Mike Layton (Ward 19 – Trinity-Spadina), whose ward covers part of Bloor, says the EA should have been done in 2014, as council ordered.

“We had clearly given direction to staff to include it as part of the budget last year, and it wasn’t. Which is frustrating,” he says. But he added that some cycling projects, like the counterflow lanes on Shaw, took longer than expected and took up a lot of the transportation department’s time.

Jared Kolb, executive director of Cycle Toronto, is also frustrated by the delay. He says that Bloor has the potential to be an important part of Toronto’s cycling infrastructure network because it’s one of the few major east-west streets downtown that isn’t dominated by a streetcar route.

But Kolb says the silver lining of Friday’s report is the news that a lengthy and expensive EA may not be ultimately be necessary to put the bike lanes in. He wants the city to install a pilot project of lanes on Bloor this year however, instead of waiting until 2016.

“People have been talking about Bloor for 15 years, 20 years, a generation. Let’s stop having such a focus on lengthy studies, let’s get out and do something,” he says.

This is not the first time the Bloor bike lane study has been delayed. Council first approved an assessment in back in 2007, and although a consultant began the work in summer 2010 the EA was cancelled in July 2012. Then-mayor Rob Ford opposed the project.

But according to city staff, the latest delay is part of a wider problem. Under questioning from councillors, staff told the committee Friday that councillors often assign studies and other projects to the bureaucracy without allocating sufficient funding to actually do the work. The report noted that “there is currently a backlog of outstanding studies” the transportation department has not been able to complete due to lack of resources.

“We keep getting asked to do more… but the resources are never added to the budget,” said Chief Financial Officer Rob Rossini.  “Things fall off the table because we don’t have the money to do it all.”

However, Layton (Ward 19 – Trinity-Spadina) pointed out that the 2013 report approved by council explicitly spelled out where the $450,000 for the assessment would come from, and it contained an assurance that the study would “little impact on existing planned projects“ like the Richmond-Adelaide cycle track.

Councillor Gord Perks (Ward 14 – Parkdale-High Park) wasn’t satisfied the bureaucrats’ explanations either. In a stern lecture directed at staff, he said that officials have been making a habit of changing council-set priorities without telling the elected representatives. As just one example, he said, staff recently changed maintenance standards for city playgrounds in contradiction of council’s direction.

Perks said it’s not up to bureaucrats to “arbitrarily overturn decisions of the elected government.”

“I don’t think it’s within the purview of the city manager or the chief financial officer to rewrite council policy in the budget without signaling that that is exactly what they have done,” he said. “We need to correct that.”