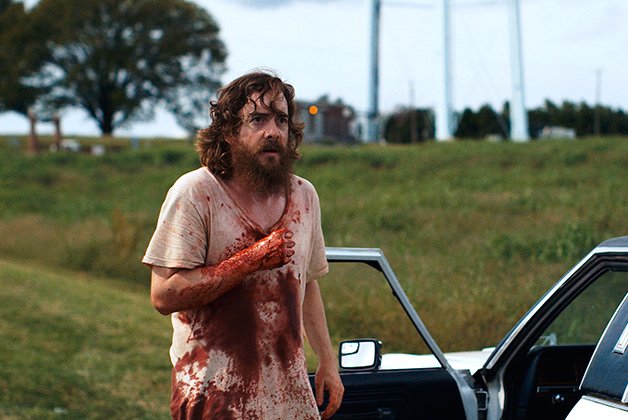 A bony, hard-edged thriller, writer/director/DP Jeremy Saulnier’s all-American revenge story explores the consequences of getting caught in the tit-for-tat algebra of retribution. Macon Blair stars as Dwight, a scruffy itinerant living out of his beat-up blue car. The pitiable yet resourceful Dwight’s immediately likeable under his tangle of facial hair and scuzzy clothes.

Careful to parcel out information (and later, big-deal plot twists) without lapsing into murkiness, Saulnier reveals that a criminal recently released from prison killed someone close to Dwight. When Dwight returns to his Virginia hometown, his payback plan is instantly complicated when friends and family are dragged into an expanding network of murder and vengeance.

Beyond its clockwork pacing, carefully fashioned compositions and knack for neatly reversing its cat-and-mouse, predator/prey dynamics (often within the same scene), Blue Ruin works nicely as a commentary on gun (and hunting) culture in America. Saulnier creates (or just presents) a world where access to firearms seems to lead unavoidably to a mounting body count.

As the corpses pile up, Blue Ruin plays like an ever-expanding Mexican Standoff, death met with death in a sprawling network of violence that implicates a whole gun-crazy nation.