An unusual number of TDSB contests have tiptoed toward mainstream attention 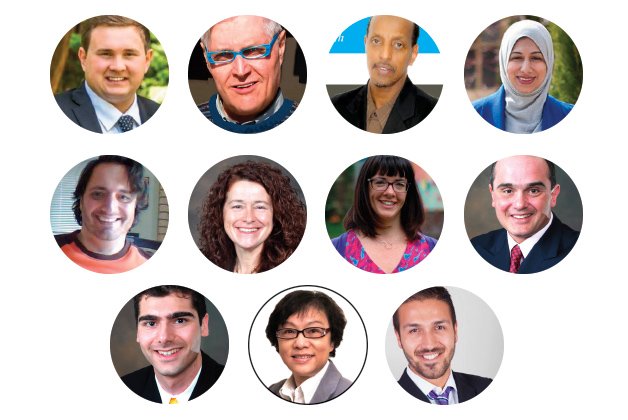 “Thank you, everybody, for coming out tonight. It’s really nice to see so many people. We had hoped for a packed crowd, but that’s okay.”

There were between 30 and 40 people in attendance for the Monday, October 6, debate among those vying for the Toronto District School Board’s ward 10 (Trinity-Spadina) seat the main level of the Central Toronto Academy auditorium holds 612.

And as this was expected to be an especially fiery showdown (it wasn’t), at least half the crowd consisted of supporters of the eight candidates who had come out to cheer for them.

In Ontario, school boards exist as a shadow of municipal councils and tend to attract an according amount of interest. Ever since the late-90s Progressive Conservative government of Mike Harris stripped boards of their taxation powers and reduced the role of elected trustee to a part-time job paying only an honorarium, the public has been discouraged from taking their authority seriously. In a number of respects, school boards have been set up to fail.

Still, the functions of trustees – setting education policy, assisting students and parents with issues and overseeing the management of a large-scale public institution – remain vital. A lot of people who seek the job really want to make a difference.

In this election, for various reasons, an unusual number of TDSB races have tiptoed toward the mainstream consciousness. Here are five that are uncharacteristically compelling:

Candidate Michael Ford is the grandchild of the late MPP Doug Ford, the nephew of Mayor Rob Ford and Councillor Doug Ford Jr., and the son of Kathy Ford and ex-husband Ennio Stirpe, who’s currently serving an 18-year jail sentence for attempted murder. He’s in his early 20s, with some sort of pilot’s licence and no known interest in education. He signed up in the last half hour that nominations were open, upon withdrawing his bid for Ward 2 councillor to make way for Uncle Rob. He’s declined every media request for an interview so far and didn’t even bother to record a prepared statement for Rogers TV (an opportunity extended to all trustee candidates). He is running on his name and pedigree alone.

In the other corner is incumbent John Hastings, who was a councillor in the old City of Etobicoke until jumping to provincial politics with the PC wave of 1995. He stayed in the legislature for two terms, declined to run again in 2003 and was elected as a trustee in 2006. These days, he’s mostly known for his funky glasses and being the seconder of trustee Sam Sotiropoulos’s inflammatory motion casting the Pride parade as inappropriate for TDSB participation.

Among the six other challengers sidelined by the focus on the Fordling is Dahir Galbete, a Somali Canadian with deeply progressive views on education: he dismisses the value of standardized tests and believes that an emphasis on core academics fails to develop students’ social, psychological and physical well-being.

Ausma Malik, a former U of T student union exec who’s bounced around NDP circles and is currently on leave from the Stephen Lewis Foundation, has received endorsements from Councillor Mike Layton and council candidate Joe Cressy. As a young Muslim woman who wears a hijab and once criticized Israel’s 2006 air strikes on Lebanon, she has also received backlash from certain quarters that wouldn’t otherwise take notice of a school board election. “Chow endorses radical Muslim terrorist sympathizer for trustee” read the headline of a recent op-ed in the Jewish Tribune, the media arm of far-right B’nai Brith Canada.

Similar sentiments have been expressed by candidate Richard Klagsbrun, a former executive at Hollywood studio Participant Media, who runs the Eye On A Crazy Planet blog and considers the Ontario Coalition Against Poverty to be a group of extremist Marxists.

Incumbent Cathy Dandy belongs to the generation of politicians who made their names as parent activists battling Harris’s cuts to education. She worked alongside Kathleen Wynne at the Metro (later Toronto) Parent Network and took over as the face of the group when Wynne was elected to the school board in 2000. Dandy remained in that role until her own ascent in 2006. She’s one of the few reliable progressives remaining on the board and boasts support from former mayor David Crombie.

Dandy’s biggest challenge, however, comes from the left: Jennifer Story is at the front of a new group of NDP-backed reformers looking to salvage a board that wades into scandal with remarkable frequency. Story’s resumé is a bingo card of left-wing bona fides: stints with the Canadian Federation of Students, Council of Canadians, Greenpeace and the offices of MP Jack Layton and Councillor Mike Layton. (Her husband is the Broadbent Institute’s Rick Smith.) She created the Students First Pledge, onto which more than 30 candidates have signed, promising to clean up the board and hire an ombudsman. Her endorsers include MPP Peter Tabuns, MP Craig Scott and Councillor Paula Fletcher.

Held by Michael Coteau until his 2011 election to Queen’s Park, the seat was narrowly captured by Harout Manougian in a 2012 by-election. In a field of 17 candidates, the then-25-year-old professional engineer managed to squeak in with just 18.9 per cent of the vote. In his short time on the board, he’s distinguished himself for his conservative values the anti-choice Campaign Life Coalition has praised his “courageous” support for Trustee Sotiropoulos’s anti-Pride motion. At the same meeting, he was one of just three trustees to oppose a separate motion reaffirming the TDSB’s commitment to celebrating Pride. Xtra recently turned up a 2005 op-ed Manougian wrote for a student paper at the University of Waterloo in which he argued that same-sex marriage rights opened the door to polygamous marriages, bestiality and incest. He told Xtra that his views have since evolved.

Robert Cerjanec, who finished just 317 votes behind Manougian in the by-election, is taking a second shot at the seat. A past York Federation of Students VP and Shelley Carroll fan boy, he’s running on a platform of restoring integrity to the scandal-plagued board.

Arguably, no incumbent is better known or more vulnerable than Sam Sotiropoulos. He slipped in in a 2012 by-election and promptly displaced Councillor Giorgio Mammoliti as the most enthusiastic social conservative holding office in Toronto. He appears to view himself as a kind of culture warrior, striking out against the crumbling morals of modern society. This has included a bizarre fixation on nudity at Pride, as well as mocking dismissals of the very concept of transgenderism. He was supported by labour groups in his 2012 bid, but they won’t be making that mistake again.

Sotiropoulos could well be toppled by Manna Wong, who finished just 171 votes behind him in the by-election. An assistant to NDP MPP Peter Tabuns (and previously Marilyn Churley), Wong is getting the left’s backing this time around. John Furr – who organized the summer’s Shirtless Horde protests against Mayor Ford – originally signed up to take on Sotiropoulos but withdrew to support Wong when it became apparent she had a much better chance of beating him.

Also keep an eye on:

• Ward 14 (Toronto Centre-Rosedale), where armed with the support of both local councillors, hospital worker Chris Moise wants to replace Sheila Ward, who’s been around since amalgamation.

• Ward 18 (Scarborough Southwest), where teacher and Tamil TV talk show host Parthi Kandavel is looking to oust Elizabeth Moyer, who NOW rated an “F” as far back as 2001.