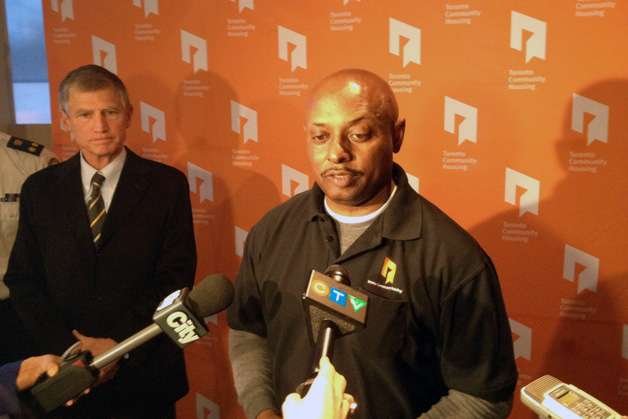 Eugene Jones is on thin ice heading into a crucial meeting of the Toronto Community Housing board Friday. According to one source, board members’ support for the controversial housing CEO is “almost non-existent.”

The source, who has knowledge of the board’s deliberations but asked not to be named, told NOW that “in all probability” the 13-member board will vote to dismiss Jones at its in-camera meeting Friday morning. “I think that’s where people are going,” the source said.

Two other people close to the situation who didn’t wish to be quoted cautioned that some board members remain undecided however, and that a decision on Jones’s future with the organization had yet to be reached.

Several board members contacted by NOW refused to speak on the record about the CEO’s fate, citing the board’s confidentiality policy.

Jones was brought in to reform the city-owned social housing agency in June 2012, following what was then considered a spending spree when TCH paid $40,000 for a Christmas staff dinner and $1,000 for Holt Renfrew chocolates among other things.Mayor Rob Ford used the issue as leverage to oust the previous leadership.

The CEO’s position is now in jeopardy following the release Tuesday of a damning report by ombudsman Fiona Crean. In it, Crean concluded that Jones and other senior executives “repeatedly broke TCH recruitment rules” and created a “climate of fear” as they undertook a sweeping overhaul of the agency.

Among the ombudsman’s findings, which are not disputed by the board, was that Jones and other senior management staff hired employees without holding job competitions or interviews, determined salaries “arbitrarily,” and ran the agency “as though it was their own personal fiefdom.”

In one instance, Jones promoted a manager who had been hired only six months earlier and gave her a $30,000 raise with no formal evaluation.

In another case, Jones’s executive assistant was allowed to collect overtime, even though it was against the rules. When her salary topped $100,000, Jones directed staff to alter pay records so that it appeared she had been paid less.

Jones has not commented publicly on the report, but last week he hired employment lawyer Soma Ray-Ellis.

In an interview with CP24 on Thursday, Ray-Ellis suggested that disgruntled employees were behind the ombudsman’s scathing report, which was prompted by complaints from current and former TCH workers.

Meanwhile, mayor Ford continues to back the embattled CEO, who he says has made enormous improvements to the housing system. At a press conference Thursday afternoon the mayor urged the board to keep Jones on.

“Let Eugene Jones continue doing the excellent work he was asked to do, and that is clean up the mess at Toronto Community Housing,” Ford said. “Let’s not let politics stop him from doing a great job.”

Ford promised he would be at Friday’s meeting to support the CEO, but although the mayor has a designate on the board he will not be allowed to sit in her place. In November 2012 council appointed Councillor Maria Augimeri as the mayor’s representative, and only council could chnage the decision to appoint Ford to the spot. At the mayor’s press conference, he wrongly said that Councillor Ana Bailão was his designate.

While Ford appears ready to go to the wall for Jones, other council members aren’t nearly as supportive. Councillor Kristyn Wong-Tam released an open letter to board members that all but called on them to fire Jones.

“We expect clear accountability and transparency from TCH for all their operational decisions,” she wrote. “Please ask yourselves … Does the CEO comprehend and embody the best corporate practices at TCH?”

“The tenants of TCH count on you to provide experienced and lucid governance. I know that I certainly do,” the letter concluded. “Please don’t let us down.”