Bob Hoskins, the English actor famously described by Pauline Kael as "a testicle on legs," died Tuesday night after a. 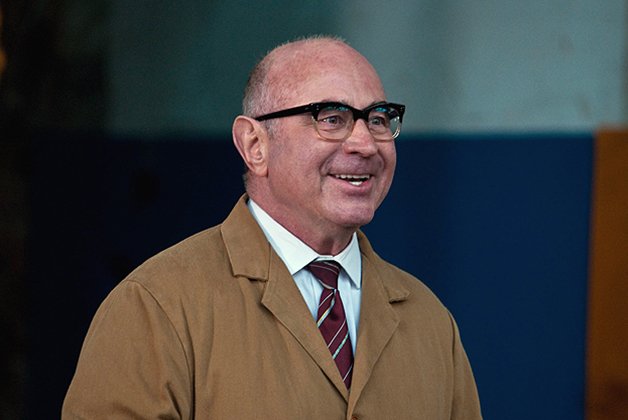 Bob Hoskins, the English actor famously described by Pauline Kael as “a testicle on legs,” died Tuesday night after a bout with pneumonia, his family has announced. He was 71.

I interviewed Hoskins in December 1995. I was in New York City for a week of press days. One of them was for Oliver Stone’s Nixon, which boasted a frankly ridiculous all-star cast, including the squat English powerhouse.

As if determined to play up the fact that Stone had assembled a who’s who of actors, Disney held the round tables in a massive ballroom, rather than the usual series of hotel rooms. This required the talent to get up and switch interview tables every 20 minutes, like a giant round of speed dating. And the order of the day found Bob Hoskins and Anthony Hopkins crossing at my table.

They knew each other, of course. They came up in the British film industry around the same time, often going up for the same projects. (They seemed very different on screen, but the two men were physically quite similar – stocky, solid, built like bulls.) They made a TV-movie together in 1985, Mussolini & I Hopkins was the star, playing an Italian count, and Hoskins was Mussolini. Ten years later, Stone had cast them as Richard M. Nixon and J. Edgar Hoover.

Anyway. Hoskins arrived as Hopkins finished at my group, clasping his friend’s shoulder with a big smile. Hopkins looked up, smiled back and cocked an eyebrow at us. “Nixon and Hoover,” he said.

“Powerful men,” Hoskins replied in a low, serious voice. And then they snickered and giggled like kids sending up the announcer in a movie trailer.

They switched out, Hoskins sitting down with us. And over the course of our 20 minutes, the two actors maintained a line of sight with one another, occasionally catching each other’s eye and waving like old friends amusing themselves at a reunion.

It’s that playfulness that I remember the most about Hoskins, both in person and in his films. Though he emerged as an interpreter of hard men – the cornered gangster Harold Shand in The Long Good Friday, which led Kael to describe him as above, or the thuggish ex-con-turned-chauffeur George in Neil Jordan’s Mona Lisa, which landed him his only Oscar nomination – but it was all an act.

To see him play comedy – as he did in Terry Gilliam’s Brazil, or Alan Alda’s Sweet Liberty, or even Steven Spielberg’s Hook – was to see the real Hoskins, a working actor delighted to have the opportunity to be silly with his friends. (You can first see it in the Dennis Potter miniseries Pennies From Heaven, in the fantasy musical numbers that provide his downtrodden sheet-music salesman with rare flashes of optimism.)

He was perhaps silliest in Who Framed Roger Rabbit, though Robert Zemeckis was smart enough to save that for the end of the picture. Hoskins spends most of the movie spitting out his dialogue as the movie’s human hero Eddie Valiant, a hard-boiled private eye forced to interact with the animated “toons” he loathes, only to finally reconnect with his inner goofball in the climax.

It’s a magnificent performance, made even more impressive by the actor’s process: in order to maintain his eyeline with nonexistent characters – this a few years was before Steven Spielberg’s breakthrough use of tennis balls on sticks for the beasts of Jurassic Park – Hoskins forced himself to hallucinate his co-stars on the set. It works brilliantly, though Hoskins claimed the visions persisted (“weasels, mostly”) for months after the shoot.

The success of Roger Rabbit gave Hoskins some juice in the industry, but Hollywood never really figured out what to do with his talent, casting him as Cher’s unlikely love interest in Mermaids and mining his appeal to children in Super Mario Bros. Eventually he just shifted back to the character roles that had always been his bread and butter, defining himself as a remarkable ensemble player in projects like Cousin Bette, The Secret Agent, Mira Nair’s Vanity Fair, Shane Meadows’s A Room For Romeo Brass and Fred Schepisi’s Last Orders, which reunited him rather magnificently with his Mona Lisa co-star Michael Caine.

He tried his hand at directing, making two features – The Raggedy Rawney, a grim 1988 drama starring Dexter Fletcher as a young soldier traumatized by battle who’s taken in by a gypsy (Hoskins) who mistakes him for an enchantress of sorts, and a children’s movie called Rainbow in 1995. The Raggedy Rawney eventually showed up on video in North America – when we talked, Hopkins seemed surprised that I’d heard of it, let alone seen it – but Rainbow was never released here.

His biggest Canadian credit is Felicia’s Journey, of course. The movie’s not particularly great – Atom Egoyan’s elliptical approach to William Trevor’s narrative undermines both the momentum of the plot and and the tension in Hoskins’s performance – but Hoskins is fantastic, shutting down all of his humanity to play the meek monster Hilditch, whose solicitous fussing over a young Irish woman (Elaine Cassidy) can’t quite conceal his predatory intentions.

Hoskins’s Hilditch is almost unrecognizable as the man I’d met in New York four years earlier, and that’s the great complement of all, I suppose. He was a hell of an actor.