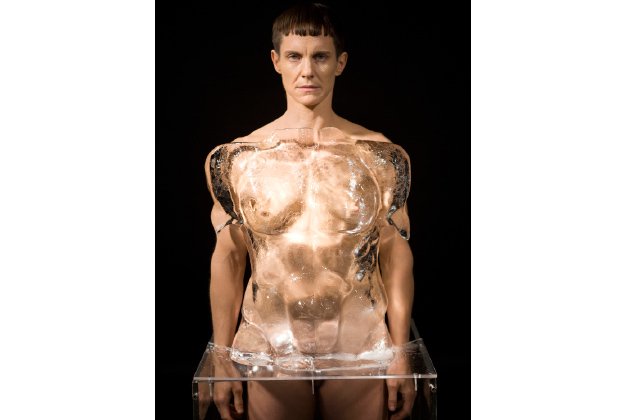 A breastplate of ice melts on Heather Cassilss body in the video Tiresias.

Sitting in the darkened room at Trinity Square Video, I figure the performer onscreen with the beefcake physique must be transgender male-to-female, with small female-hormone-induced breasts. This can’t be the same person whose high, female-sounding grunts are heard in an audio work, can it?

Welcome to the assumption-busting world of Heather Cassils. The L.A.-based Canadian video/performance artist, a personal trainer who appeared in Lady Gaga’s Telephone video, was born female.

Cassils’s art is about transforming and sculpting his body. The three videos and one audio piece that run in sequence in Cassils: Compositions, the artist’s first show in Canada, are offshoots of performances but stand on their own.

In Fast Twitch // Slow Twitch, one screen plays photos taken of the artist’s body daily over time as it’s built into a heavily muscled form, while images on the other detail the arduous process: Cassils grimaces lifting weights, lies prone as a stream of pills pours into his open mouth, chows down on raw meat and busts the seams of clothing.

The room then goes dark as it fills with what sounds like a woman with a pounding heart hitting a punching bag. The audio piece Ghost actually uses sound from a performance in which Cassils furiously attacks a mound of clay, conceived as a memorial to the trans people who are murdered in disproportionate numbers.

Hard Times shows a bodybuilding performance in which Cassils conveys the artificiality and weirdness of the enterprise by wearing zombie face makeup that makes him appear eyeless.

My favourite is Tiresias, in which a naked, stoic Cassils, looking like a Roman statue, wears a torso-shaped breastplate of ice that his body gradually melts. The transparent ice acts like a lens, magnifying the movement of his abdomen as he breathes. With a soundtrack of German lieder, birdsong and burbling water, it’s a poetic evocation of the living body transformed into art.