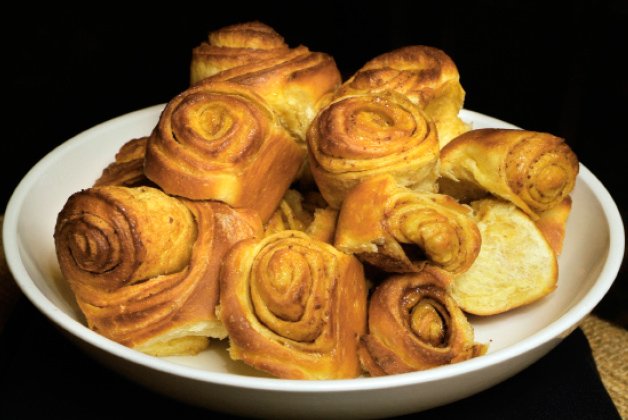 There’s the inevitable lineup out front of Leslieville’s Lady Marmalade this subarctic Sunday morn, but two blocks away we’ve got Skin + Bones to ourselves.

Since opening in November 2012, swanky S+B has been somewhat of a hard sell, more chic west-side supper club than hippy-dippy brunch spot.

If this were Dundas and Ossington, the joint would be jumping.

“It takes the neighbourhood a while to warm up to something new,” says owner Daniel Clarke. “They want to see that you’re committed to the long haul.”

To lure reluctant locals, Clarke instituted brunch service in December. The rapidly filling room around us suggests they approve.

And what a room it is! Instead of thrift-shop dinette suites and loopy bric-a-brac, we find a sleek loungey bar up front and a much larger vaulted room to the rear, a former mechanic’s garage dominated by an open kitchen and a long buffet table. You could fit a dozen SUV strollers in here – and you will, seeing as rug rats under five eat for free – and you wouldn’t even notice (much), so cavernous is the family-friendly space.

Suitably fortified with a round of $6 Campari spritzers, we opt for a la carte to start. Those who dismiss eggs Benedict as merely eggs with egg sauce will have a change of heart over brunch chef Tara Lee’s clever spin, now a great honkin’ slab of tender-pink pork belly porchetta, complete with cracklin’, topped with a yolky, sous-vide slow-poached, free-range egg covered in textbook hollandaise. A cheesy polenta puree laced with wilted kale replaces the traditional English muffin ($14 with grilled house-baked sourdough).

The ex-Cowbell sous sends out crisply fried chicken breasts in buttermilk batter offset by crunchy apple slaw ($14) and meaty mushroom stew thick with leeks and du Puy lentils and finished with more of those terrific sous-vide eggs ($11 with salad). A side of triple-cooked potato wedges with ranch dressing ($6) goes with almost everything. There’s also peanut butter and jelly French toast ($5) and Callebaut hot chocolate ($3) for the small fry.

She only makes a hash of the smoked brisket hash, an indifferent fry-up of spuds, ‘shrooms and shredded beef topped with a fried egg ($12). But what of that all-you-can-eat spread?

Although you can do Bones’s Ploughman’s Buffet on its own ($14, children 10 and under $9), it’s a bigger bargain as a $3 add-on to any of the mains. That gets you house-made granola, high-fat yogurt and syrup poached pears. One week, the charcuterie includes house-cured bresaola and fabulously fatty lonza, the next it’s fennel-flecked salami and ruby-red coppa pork shoulder.

Cheeses range from chunks of pricey Beemster and vintage cheddar to creamy Chevalier brie and chevre. Spicy togarashi and Cerignola olives are a must. And who can say no to retro house-baked cinnamon buns, sour cream coffee cake glazed with milk toffee and the most impossibly rich palmiers this side of the Left Bank?