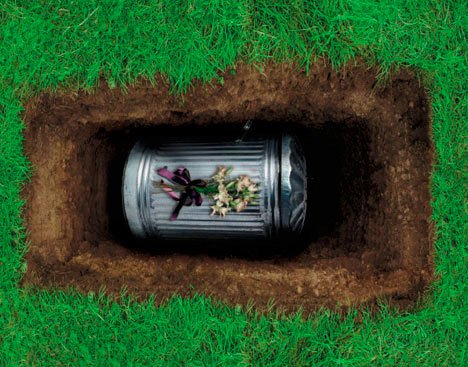 Yes, we’ve been dragging our asses and blue boxes to the curb, but a new eco movement aims to rid us of rubbish – permanently.

Waste not: the next Industrial Revolution

It’s garbage day. The reckoning. What will you drag to the curb? Your Will & Grace box set? Broken baby toys? Leftover packaging from last night’s microwave dinner? It all leaves a sloppy archaeological trail, one that should nicely signal to future generations just how we choked – and what vinyl couch finally blocked the collective trachea.

But hold up. Forward-thinking minds are saying we might just be able to have our trash and eat it, too. That’s right, kids, a zero-waste world may be closer than you think. Especially if we can turn our discarded office chairs and Britney CDs into fuel for nothing short of the next industrial revolution.

Maybe, just maybe, we’ve been looking at the concept of garbage all wrong. Rather than seeing it as a negative, something we want to hide in dark, airless pits, we should emulate nature’s design and embrace our waste, say the minds behind Cradle To Cradle: Remaking The Way We Make Things and MBDC, the innovative company set up by Cradle To Cradle’s authors, William McDonough and Michael Braungart, back in 95 to help promote and shape what they call the “next Industrial Revolution.”

If you pry open the mechanics of that revolution, Steve Bolton, manager of business development for MBDC says, “everything is nutrition for something else. Waste should be beneficial and abundant it should feed other processes.”

Back up, did he say waste should be abundant? It’s a startling statement to all of us born in the shadow of that first Industrial Revolution – you know, the one where nature’s been continually pillaged and tossed aside like yesterday’s Pop Tart wrapper.

The way the Cradle To Cradle folks see it, the only emissions coming out of products like cars and the factories that make them should be water and oxygen. And the actual products themselves? Well, under their system, all materials, including the fabric of that chair you’re parked on, would either cleanly return to the earth as organic nutrients or be harm-free “technical nutrients” that can be recycled in perpetuity or upcycled. Meaning those manufactured goods would have to be endlessly reusable, not the one- or two-use wonders of today’s plastics.

The whole thing seems to beg the involvement of government to boost producer responsibility to new heights (see page 22), though Bolton insists, “Ideally we wouldn’t need those regulations.”

Yes, regs help push foot-draggers and bottom-feeders to do the right thing, he concedes, but in the Cradle to Cradle world, regulation is a signal of design failure, a licence to dispense harm at an acceptable rate.

MBDC demands more from its corporate clients (everyone from Nike to Herman Miller). And they’ve put their vision into practice with nearly 200 products, including office chairs (see page 28), wall coverings, pipes, compostable diapers, even surf wax, they’ve fostered through their Cradle To Cradle certification system. The end products aren’t necessarily perfect (no item has received platinum certification, for instance, and not all have upcycling infrastructure in place), but the system is trying to keep the trajectory moving ahead.

A few manufacturers are even leading the cradlers’ call for a brand new checkout line framework. Instead of buying a computer, a car, a fridge outright, we’d borrow them from companies through eco-leases. That means the responsibility to dispose of that fridge or computer at the end of its life would finally shift away from the consumer and fall firmly into industry hands.

MBDC-certified carpeting companies like Shaw are perfect examples of this. Lease its EcoWorx carpet tiles and the company will replace them for you whenever a high-traffic square wears out. Shaw then uses them as fuel for the next generation of its carpets.

Some of the best post-waste concepts will be trickling into Toronto’s local industrial scene this fall. At the soon-to-be-christened Pearson Eco-Industrial Park (North America’s largest eco business zone, covering 12,000 hectares and 12,500 businesses), Toronto Region Conservation Authority will be setting up an eagerly anticipated waste exchange, among other green projects. That means a company that only needs orange peels is teamed with another company that can use the pulp. TRCA’s Chris Ricketts says the waste stream from one business alone could easily heat and cool 14 million square feet of other businesses nearby.

But you don’t have to drive to Pearson to get the feeling that the end of garbage is nigh. Walk into a Canadian Tire or Home Depot and you’ll get a glimpse of a company that considers landfill “just really poorly managed warehouses.” TerraCycle, the New Jersey company that brought worm poop fertilizer to Canada in packaging made of refilled pop bottles collected by schoolkids, is actually in the midst of setting up North American’s largest upcycling infrastructure.

Its CEO, Toronto native Tom Szaky, recently signed a mega-deal with Kraft to take on all the millions of unwanted and unrecyclable drink pouches the food giant churns out, and presto, TerraCycle sews them into pencil cases, umbrellas and binders without melting them down the way energy-intensive recycling would.

You could peg the project as dead-end downcycling if TerraCycle weren’t also telling consumer brigades to collect and return to the company every single one of the new products it makes (for cash) to be born again. It’s already got 10,000 collection locations across the country, growing at 150 a week, with a new product being launched roughly every four days.

Szaky says TerraCycle’s now in negotiations with the top 25 consumer product goods companies, from General Mills to Frito-Lay, to set up similar upcycling programs with their waste streams.

Says Szaky, “Within the next two or three years, this will be a massive infrastructure. It may not rival recycling for a while, but it’s on its path.”

He admits it’s not a perfect system. Sure, a couple of companies have changed their design a little to help accommodate the upcycling process, but some would argue that that production model does nothing to get industry to reduce the amount of packaging it puts out to begin with.

Still, its waste-swallowingways help make TerraCycle a good example of the cradler concept that growth, done right, can be green. Growth can be fun. And consumers don’t have to stop what they do best: consuming.

The idea might irk strident enviros, but until capitalism and all its benchmarks are swept away by a great sea of melting polar ice, learning to eat our waste might be the best road map to sustainability we’ve got.

The city's insistence Adam Skelly pay $165K in policing costs related to the shutdown of his restaurant is turning into.