All the drama from this year's restaurant and bar scene 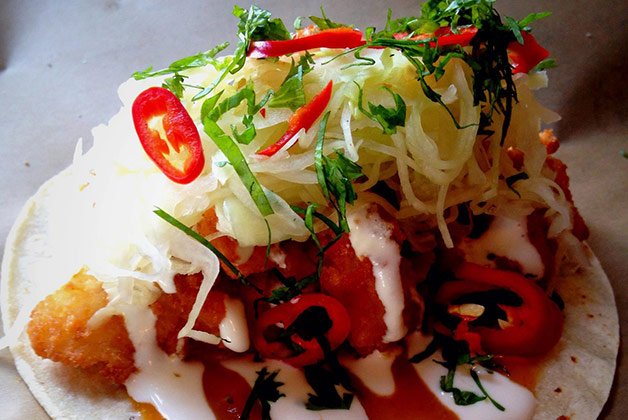 As we take this time to look back on the best the food industry had to offer this year (be that restaurants, bars or menu items), we’d also like to pause and reflect on the absolute worst. Here’s the year in sexist remarks, victim-blaming, bad business decisions, underwhelming representation, non-apologies and jerky Internet reviews.

Casual misogyny and tacos: A match made in hell! It was a big year for Toronto’s bro-iest taco spot: opening an uptown location, launching a spin-off bar, and inching toward total soft-serve domination. They were also plagued with less-positive attention, however, thanks to whoever used “grab her by the taco” as an Instagram caption, the manager who allegedly body-shamed a potential employee in an interview, and everyone involved in the design, approval, printing and installation of this bathroom sign. A couple half-hearted apologies later, parent company Monarch and Misfits rolled out an action plan that included sensitivity training and an immediate $20,000 donation to women’s charities in Toronto.

Toronto’s bar and music communities were both up in arms this fall when two women reported that they had seen male patrons at Ossington bar The Painted Lady slip drugs into their drinks. When the women complained to staff and security, they say, no action was taken. The management initially doubled down, saying since they couldn’t prove the men had done anything, there was no reason to ask them to leave. A later statement included a list of suggestions on what guests should do in case they’re ever the victims of drugging, which was unpopular, for presumably obvious reasons.

No Pride in Pride’s food events

Pride’s come a long way, from underground political protest to one of the city’s biggest tourist draws. Now everyone, from big corporations to competing tourist attractions, want in on Pride Toronto’s ability to pull a crowd. Not a bad thing, per se – but when we took a look at summer food events that had registered on the Pride calendar, none of them had a single stitch of LGBTQ-specific content, programming, direction or volunteer training. (Meanwhile, every last theatre event, musical performance, party or panel at Pride had LGBTQ folks front and centre.) Let’s fix that in 2017, k?

The Maple Leaf Gardens Loblaws paints itself rainbow at Pride every year, and actually hosted an event of their own this year – but they also brought in a security guard to keep an eye on the busy public washrooms, who began moving folks back and forth from the “men’s” line to the “women’s” line, apparently in a misguided attempt at crowd control. Store staff were reportedly flippant and dismissive when patrons complained. Memo to corporations and security firms: training staff on how to react sensitively to different populations would go a long way toward warding off big PR disasters (and, you know, being decent to people).

Ontario beer? Booming! Ontario wine? A massive industry! Ontario cider? The next big thing! But independent distillers, already struggling to get a foothold in the province and praying for reform, instead got slapped with a 61.5% tax (for perspective, that’s about 10 times what Ontario wineries pay per bottle) that replaces their LCBO stocking fees. Technically, it’s a slight improvement – companies stand to save a couple of bucks per bottle – but distillers say it “barely moves the needle” on their already staggeringly expensive operations.

Edulis vs. the Internet

Fine dining spot Edulis fired back this fall against a particularly nasty online review, sparking a debate about the impact patrons’ tossed-off comments can have on business. I have to admit that my inner cynic was initially a little less than sympathetic – after all, in the grand scheme of things, Edulis has a lot of reviewer praise and industry esteem in its corner. Then again, I can sympathize with how hard it is to just get through the day without some shrill armchair critic trying to tell you how to do your job in the comments section.

It’s bad enough biking through three inches of slush to deliver someone’s pad thai, but Toronto’s couriers got a double-whammy this fall. UberEats changed their fee structure, drawing heat from full-time couriers who say it’ll make for a huge dip in pay. Meanwhile, Texas-based company Favour pulled out of the city entirely, informing couriers that they were out of a job by text (ouch) half an hour before their shifts began (double ouch).

And finally, the worst of the worst: Sexual assault charges for the owner of College Street Bar, Gavin MacMillan, and staff member Carasco Enzo Dejesus, who allegedly drugged and sexually assaulted a 24-year-old woman on the premises earlier this month. Since the charges surfaced, a petition has been circulated asking for the bar to institute anti-assault training and donate to a women’s charity … provided it stays open. Look for this case to colour the narrative around the ugly intersection of rape culture and the hospitality industry in the year to come.