Absolutely. That's just one of the events at Bourbon Week, kicking off today 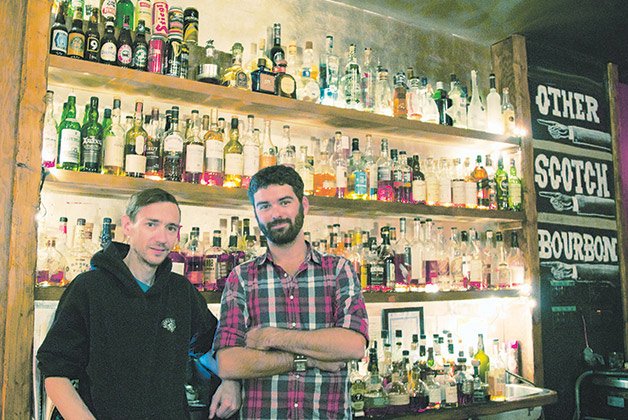 Can you tell the difference between Builleit and Woodford Reserve? Do you think sour mash is some sort of vegan baby food atrocity? Are you dangerously uninformed about the impending international bourbon shortage?

The celebration of Kentucky’s most infamous export kicks off today and runs until Thursday November 20 at a range of venues that span from the Junction to Adelaide to the Danforth. There will be tastings, competitions, and all manner of bourbon-infused edibles on offer. If that doesn’t whet your appetite for some Yankee hard bar, consider the following: international bourbon sales have tripled over the past decade. Combine that statistic with the fact that bourbon must spend years aging in charred oak barrels and you’ve got yourself an imminent bourbon shortage that will not be abating until a whole lot of barrels can be tapped. Lesson? Get it while you can.

Here are a few highlights:

Who doesn’t like bourbon at breakfast? This two-course Bourbon Brunch is hosted by Insomnia Restaurant and Lounge on Bloor, and features Kentucky-style food and cocktail pairings. A southern inspired bourbon braised brisket benedict paired with an in-house five-week cask aged Manhattan cocktail gets the ball rolling, followed by fried chicken and waffles doused in bourbon brown butter and served with a side bourbon braised beans. Wash it down with an Old Ezra’s Frozen Custard Float, a sweet concoction made with Ezra Brooks Bourbon, homemade frozen vanilla custard and root beer, and get comfortable for the inevitable food coma that will follow. Sunday November 16th, 3pm-5pm. Insomnia Restaurant and Lounge, 563 Bloor St. W. Advanced tickets, $44.85, at Bourbonweek.ca.

“Bourbon is like the spirit version of beer in many ways,” says Bourbon Week founder Cass Enright. As one of the city’s major players on the beer scene, Enright sees bourbon as a natural extension of his beer-related endeavors (he founded the Golden Tap Awards and The Bar Towel). With that in mind, he’s asked Bar Hop to host Barrel Aged Beers and the Bourbons Who Love Them. Three rare Ontario bourbon barrel aged beers will be paired with the brand of bourbon that the barrel original held, making the abstract connection between the two beverages all the more tangible. There will also be an extensive and pretty darn fancy tasting menu of bourbon-infused items for $8 a plate. Wednesday November 19th, 6pm. Bar Hop, 391 King St. W. Entry is free, no reservations required.

Those looking for some full-on bourbon education will want to attend the week’s closing night marquee event, the Bourbon Derby at 3030 Dundas West. Guests pick a three-bourbon flight from a specially assembled collection of 20 of Kentucky’s finest, and then are personally guided through their tasting by Kentucky-born bourbon expert Lucas Twyman. It wouldn’t be a derby without some competition, so attendees will vote on their favourite bourbon and crown a champion at night’s end. There’ll also be an a la carte menu of bourbon infused dishes and live music from Toronto banjo-pickin’ indie group Young Running. Thursday, November 20 with seatings at 6pm, 7pm, 8pm and 10pm. $25. 3030 Dundas West. Tickets at Bourbonweek.ca.