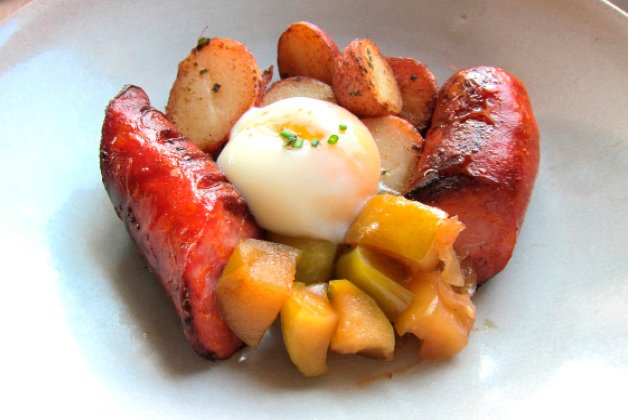 You remember the launch of the heavily hyped Hudson Kitchen (800 Dundas West, at Palmerston, 416-644-8839, hudsonkitchen.com, @hudsonkitchen, rating: NNN) during last year’s TIFF. Rumour has it Brad Pitt, Jennifer Aniston and Matthew McConaughey are still holed up in the basement party room.

Like a lot of chi-chi cantinas, this Kitchen comes with a concept. According to its website, that’s to offer “a unique dining experience that takes you through the comforting streets of Europe, past the hustle and bustle of Madison Avenue and into the art studio of Jackson Pollock.”

As expected, there’s a “whimsical cocktail program” and an “autobiographical” menu from ex-Ursa chef de cuisine and Woodlot sous Robbie Hojilla that follows a “leaf to root philosophy” – whatever that might be. Salad, perhaps?

He counters spicy cider-glazed Portuguese chorizo with sweetly braised apple, slow-poached eggs and fingerling potatoes roasted in duck fat ($12). His Benny is positively Reubenesque, its rye bread base spread with Russian dressing and stacked with corned veal brisket, sauteed sauerkraut and a pair of barely cooked eggs in lemony hollandaise ($13). Add some roughage with a side of miscellaneous mesclun dressed with walnut brittle in champagne vinaigrette ($4).

And though the advertised pineapple mostarda is missing from Kitchen’s French toast done Filipino-style with caramelized roast pork and maple syrup, it isn’t missed. But don’t pass up Hojilla’s homage to former employer Marc Thuet, an impressively plated recreation of the latter’s signature steak tartare (both $13) right down to its baked crostini, organic frisee and artful blobs of 65C egg yolk.