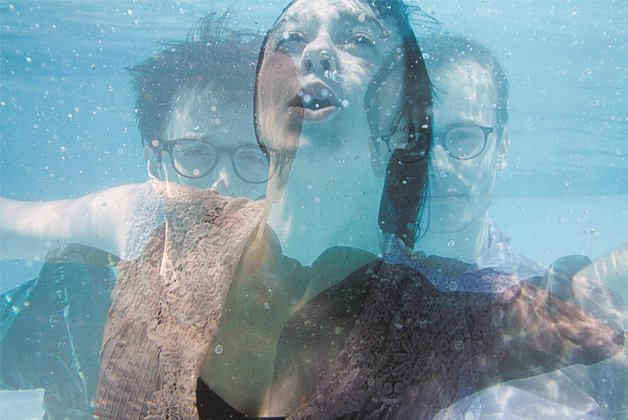 A braid is formed by intertwining strands – but at least three segments are needed for a proper plait. Perhaps it’s fitting, then, that even though atmospheric indie electro crew Braids went through turmoil after losing a member following their well-received debut album, Native Speaker, they find themselves now tighter than ever as a trio.

During the writing of their new record, the electronic-tinged Flourish//Perish (Flemish Eye), singer Raphaelle Standell-Preston, drummer Austin Tufts and bassist Taylor Smith parted ways with keyboardist and long-time friend Katie Lee after disagreements arose over the direction the music was taking.

“We just wanted to push ourselves and have a really creative writing experience,” a tired but chatty Standell-Preston explains over the line from the airport en route to a tour stop in Halifax. “There was that desire not to do something we’d done before, and some of us were pulling in the other direction and had a hard time with all that change.

“It’s a challenge not to feel really saddened about it and wish things had gone differently. We had to endure a lot, but we put everything on the line to be in the band and finish the record.”

Change came not only through the split, but also in the simple act of growing up. Only in their early 20s, the group relocated to Montreal from their native Calgary prior to releasing their debut in 2011. A Polaris Prize nomination and 18 months of touring later, they took to the studio for a year to write and record – time they needed to process their quick rise and their own personal journeys, including Standell-Preston’s 2012 side project, Blue Hawaii, with her then-partner, Alex Cowan.

“It’s so interesting having the band as this constant in our lives as everything has been changing,” she says. “It’s really crazy. We’ve done so much as a band, and we all want to do some things outside of the band, but it’s nice knowing that anchor exists.”

While the three are excited to be back on the road to breathe new energy into their studio creations, touring life is hectic: Standell-Preston notes that she’s only been home for maybe a month and a half in the past year, and the band’s schedule is jam-packed until the end of next summer. But they’re finding eager ears wherever they go, with fans bringing them everything from their favourite jellybeans to handmade signs at shows.

“Sometimes it feels like your life is planned out for you, and it’s important to take a step away from that and look at what you want it to be,” Standell-Preston says. “Until recently, I never really thought about the music as something I was giving to people, but I’m realizing that it’s an exchange. It feels like we’re doing something bigger than ourselves.”