Briar Rabbit at the Drake Underground 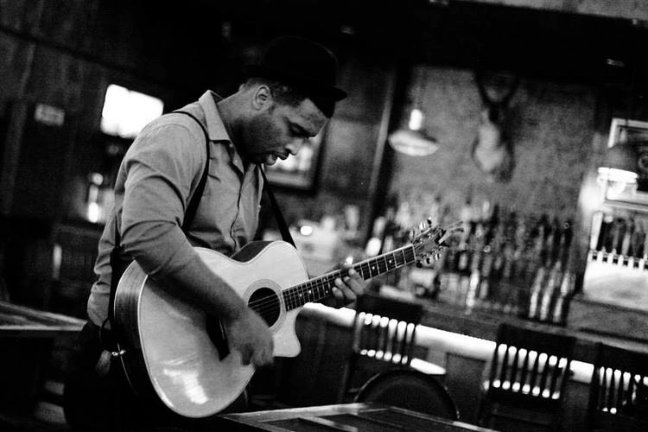 Briar Rabbit is heartbroken. Or has been heartbroken. A lot. That much was obvious at the Drake Underground Sunday night.

But neither that or the unfortunately teeny crowd dampened his sense of humour. Alone onstage with his acoustic guitar, Rabbit was quick-witted and self-deprecating. What initially came across as schticky turned out to be laugh-out-loud humorous from one of the funnier banterers in the biz. (If the music thing doesn’t work out, there’s a future in musical theatre there.)

Also like a theatre person: he dove straight into his soulful folk-pop set unselfconsciously, at full-tilt – giving a very quiet room the kind of energy you’d expect him to give a full one.

His voice (think Steven Page with a hint of Adam Duritz) was strong and true, if a little flat when he reached for the highest notes. A clever and heartfelt lyricist, Rabbit’s sometimes-painful honesty seems genuine, which salvages it from becoming over-earnest oversharing. (He told us his aunt advised him to sell his song Lock Up Before You Leave to Taylor Swift. Solid advice.)

Early in the set he covered Otis Redding’s (Sittin’ On) The Dock Of The Bay, which suited him well. A little more soul, blues and camp (he also covered Britney Spears’s Hit Me Baby One More Time) would be very welcome additions to his folksy campfire-worthy originals.