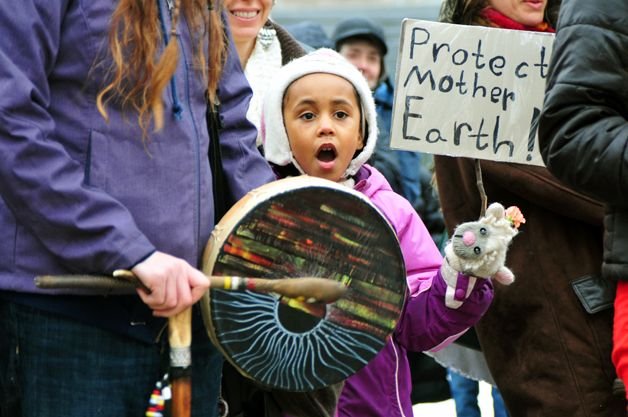 It was all soup, smudging and anti-extraction inspiration in the basement of the Council Fire Native Cultural Centre on Dundas East while icy rain pelted city streets on Thursday, February 20.

A very-stoked audience of 150 packed the room to hear Mi’kmaq Warriors from New Brunswick’s anti-fracking frontlines. The mood was celebratory and combative, a tribute to the months-long blockade against shale gas exploration by Houston-based SWN Resources Canada at Elsipogtog First Nation. The standoff, which has rivetted petroleum foes across the country, exploded onto the front pages when the RCMP idiotically launched a major raid and police cars were burnt in retaliation last fall.

Still, it has to be said: some meetings are more solidarity conveyors than informational and this was clearly one of those.

The affair, hosted by Idle No More Toronto, the Ontario Coalition Against Poverty, No One Is Illegal and No More Silence, was opened by elder Pauline Shirt calling for assistance from the spirit helpers with her feathers.

Holding up a tiny pail of water, she told the room: “The water helps us look at ourselves we see our reflection in it,” underscoring the prevailing theme that this was, above all, a movement to save lakes and rivers.

Speakers from various resource-besieged communities made the connections.

A Grassy Narrows activist via Skype appealed for help in a spring anti-clearcut blockade remount. Whitefish Lake First Nation’s Alexa Lesperance addressed mercury levels in fish and the high rates of miscarriage and infertility. And Krysta Williams of the Native Youth Sexual Health Network urged the audience to consider the concept of “reproductive justice.”

Somewhere after the blessings, the supping and the drumming, it occurred to me that we weren’t going to learn much about hydraulic fracturing or the broader movement against it. Or about the Peace and Friendship Treaties that left New Brunswick unceded native territory, Elsipogtog’s success bringing allies into the fight against SWN, or the merits – or lack thereof – of hurling Molotov cocktails and torching police cars.

Stevens’ reflections on his path to political action showed exactly why First Nation land-defense, connected as it is to personal survival, is such a potent force.

Recounting the story of his 10 years as an addict plagued by suicidal thoughts, the Warrior with the nevertheless bubbly personality offered that “The Mi’kmaq have been oppressed for 500 years. It was the “design [of the colonizers] to create the outcome of my life.”

Imprisoned for a crime in 2007, he noted that of the 27 other Mi’kmaq in the cells with him, many became suicide victims. Still suffering from addiction and struggling for meaning, Stevens travelled to Elsipogtog, which means River of Fire (ironic given the incendiary nature of fracking).

“I knew I had to find the Warriors and I would be all right” he says. The protest actions “lit a fire in my heart. When the women would drum and sing, I would cry.”

On October 17, the day of the raid, he was arrested by the RCMP first thing in the morning and spent two months in prison, three weeks in solitary, finally pleading guilty to assault police as part of a plea bargain in late December. (He claims that on the day of the raid, members of the Warrior Society were all arrested by 10 am the police cars were set on fire after 1pm.)

“I’m not doing this because I want to,” Stevens said. “It’s because I have to. People say our land was stolen from us but our land is right here – let’s start occupying it.”