Brothers In The Kitchen serves up moving stories at Hot Docs 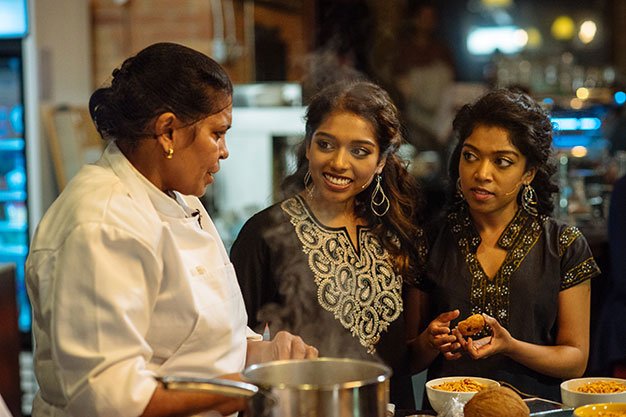 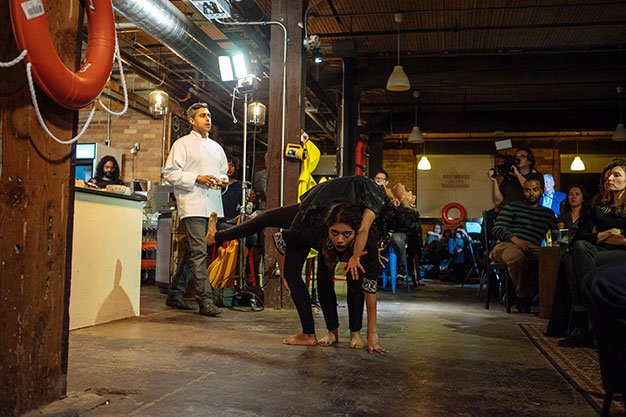 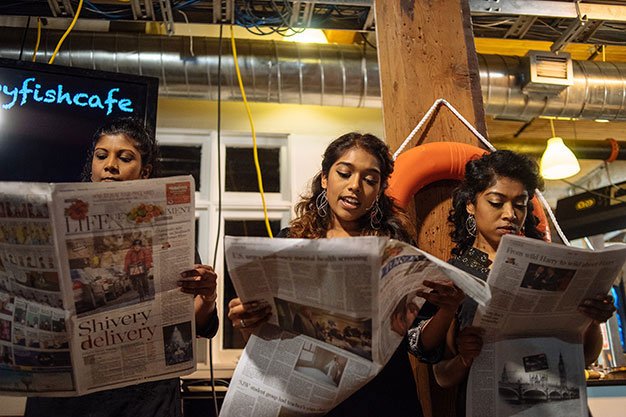 Former Toronto Star columnist Corey Mintz called Tamil migrants the “backbone of Toronto restaurants.” He isn’t alone in that observation. On Wednesday night, Hot Docs unveiled Brothers In The Kitchen, a live documentary about the long, perilous journey of Tamil refugees from Sri Lankan civil war zones to the back of your favourite souvlaki spots.

The performance at the Centre for Social Innovation had two women standing in a kitchen preparing payasam, a Tamil dessert similar to rice pudding, for a limited audience of about 150. At the intimate and interactive gathering, speakers shared traumatic memories, with support from video installations, a live band and dancers whose fluid Bharatanatyam movements channelled the show’s poetry, and on occasion, horror.

A few technical glitches during the experimental production were welcomed as part of the collaborative process, and the audience was sometimes called on to read archival newspaper clippings aloud.

The CBC’s Manjula Selvarajah hid at a bar until it was her turn to grab the mic and tearily offer a heartbreaking childhood memory of rioters trying to break into her house during Black July, the anti-Tamil pogrom that killed thousands and displaced many more.

Author Amarnath Amarasingam remembered the strangers who’d aggressively knock on his door in Toronto, collecting money for the Tamil Tigers from Tamil families weighed down by guilt over what they’d left behind.

Former Toronto mayor Barbara Hall described how the Tamil community grew from a few men crowding mattresses in small apartments to the hundreds of thousands in Canada today. And former premiere Bob Rae gave a sad account of how the community has still been denied the ability to heal.

Ironically, the titular “brothers in the kitchen” were not on hand, because performance director Cyrus Sundar Singh couldn’t get them “out of the kitchen.” You can’t really pull a line cook from his job on a Wednesday night.

The sheer breadth and depth of the show was astounding. It offered an immersive history on Tamil migration, the memories, music and art all informing a search for what the Tamil-Canadian identity has become, or is becoming. A couple of dancers were part of a new generation, born and bred in Canada but still holding their mother culture dear.

According to Singh, the young generation of Tamil Canadians is what made this project possible. A multimedia artist also known for writing music, Singh wanted to make a documentary on the Tamil journey more than a decade ago, but had to put it on hold because the conversation was far more guarded, touchy and misunderstood at the time.

Today, Tamils are represented in politics and have writers like Amarasingam shedding light on the community’s identity while simultaneously shaping it. Singh also found the forum and support to experiment with telling these stories at Ryerson’s documentary MFA program. Brothers In The Kitchen is just the first stage in a long-term project that should lead to a documentary film.

It was by pure coincidence that the show debuted the night before NOW’s I Am Tamil cover story. Neither of us knew what the other was working on until a couple of weeks ago. Singh sees that serendipitous collision as a sign of how much Canada has changed since Justin Trudeau took over from Stephen Harper.

“What helped me to tell this story, and helped people listen to it, is when the Syrians arrived,” says Singh. “All of a sudden, the idea of a refugee became something to collectively embrace. When the prime minister goes to the airport and welcomes them, the narrative changes.”