NOW MagazineMusicBuffy Sainte-Marie shows us the way at #polaris2015

Buffy Sainte-Marie shows us the way at #polaris2015 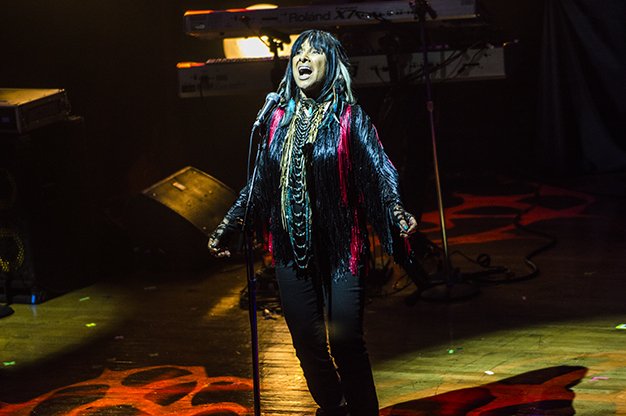 My favourite interview so far this year was with Buffy Sainte-Marie, back in May. The 74-year-old spoke to me from her country home in Hawaii about the march of time, Idle No More’s similarities with the coffeehouse movement of the 60s, and her intense new album Power In The Blood (True North).

“When I was in my 20s every day was new, and I’m in my 70s now and every day is new,” the iconic singer/songwriter told me, and I hung up feeling warmed all over by her optimism and hope.

The Polaris Prize is not awarded for best interview, nor for best performance – though her standing-O-inducing set that opened last night’s gala would’ve been a contender if it were. It’s for best Canadian album of the year, plain and simple, record sales be damned, and Sainte-Marie’s driving Power In The Blood, which translates its anger in a direct, clear-eyed way that encourages solidarity and union rather than distance and hate, deservedly won.

She used her stage time to call out corporate greed, and spoke about the struggle of today’s touring musicians – “the airlines are killing us” – mentioning that she’d put her $50,000 prize money into her recording studio.

The prize always courts a degree of controversy – no one will ever agree on which 10 albums are most deserving, especially in a year when Drake has released one (his If You’re Reading This It’s Too Late made the short list, and was introduced at the gala by councillor Norm Kelly) – but this year’s event had far more than usual due to a recent Canadaland piece by Johnnie Regalado entitled I Was A Polaris Juror And It Sucked (full disclosure: I’m a juror, too, but have not found the experience to be sucky), and Viet Cong’s self-titled album being short-listed despite the offense many have taken to their name.

A day earlier, the Calgary post-punks released a statement saying they would change their name, but that didn’t prevent protesters from showing up outside the Carlu, where the gala took place, wearing T-shirts that said “still named Viet Cong still no apology still racist.”

The band gave a somewhat subdued performance late in the night, following ones by Braids (the lacerating Miniskirt raised the hair on my arms, and Raphaelle Standell-Preston has pretty much the best voice in current music), NOW cover stars Alvvays (playing up the “dream” in dream-pop thanks to angelic white outfits) and another NOW cover star Jennifer Castle, whose mournful, moving tunes were subtly enhanced by the Toronto Symphony Orchestra.

If you couldn’t tell by now, women ruled the night.

For a full list of the short-listed albums, visit http://polarismusicprize.ca/2015-nominees/.