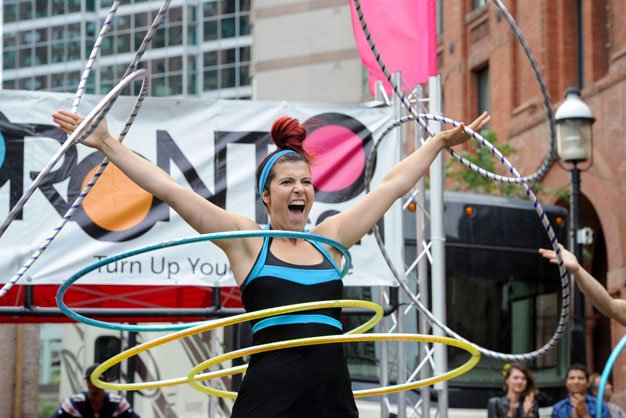 After losing its title sponsor in 2015, North America’s largest street-performers festival is bouncing back – with a new name, a new venue and new dates. The 17th annual Toronto International BuskerFest for Epilepsy, which was previously referred to as Scotiabank BuskerFest, will take place at Woodbine Park over the Labour Day long weekend (September 2 to 5).

BuskerFest is the most important fundraiser for non-profit group Epilepsy Toronto. Last year, the event raised $250,000 for the organization.

In 2015, Scotiabank cut ties with BuskerFest – as well as several other arts-related events such as Nuit Blanche Caribbean Carnival and the CHIN Picnic. For BuskerFest, that meant a loss of 50 per cent of its funding, or around $150,000. Up until February, festival organizers weren’t confident they’d be able to continue.

“We’re looking for an alternate sponsor, or multiple sponsors at lower sponsorship levels, but nothing has panned out yet,” Drew Woodley, Epilepsy Toronto’s director of communications, told NOW at the time.

However, the Province of Ontario and the Toronto Education Works (CUPE Local 4400) have stepped in, with 10 other media sponsors providing support as well.

BuskerFest’s previously received sponsorships from more than a dozen downtown businesses, such as the Chelsea Hotel, Ryerson University and the Downtown Yonge BIA. This made sense in terms of the festival’s Yonge Street venue in previous years. However, all 100 entertainers, including fire jugglers, acrobats, aerial artists, clowns, magicians and contortionists, will be moved to Woodbine Park, which has been a source of noise complaints for neighbourhood residents during other mass gatherings, like AfroFest.

According to BuskerFest, Woodbine Park will allow the festival to spread out and have a licensed beer garden. The event will also be gated so BuskerFest can collect donations at its entrances.

“It’s our largest single revenue source and the largest epilepsy event in the world,” Woodley said. “It’s a great way to bring together the work we do supporting Toronto’s epilepsy community and some interesting performances and art from around the world.”