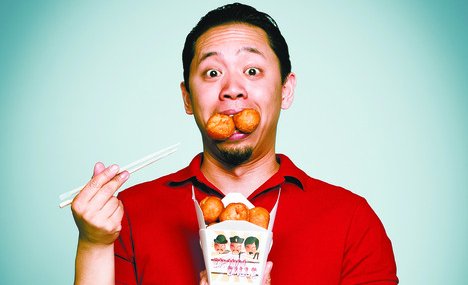 Byron Abalos sticks it to Western images of Asian men.

A student at the time – and the only non-white in his acting class – Abalos finally saw a character who wasn’t a token but a fully developed, flawed human being.

Fast-forward to 2008, when Abalos appeared in the remount of Banana Boys, which has a scene dubbed “the battlefield of love.”

“It looks at the hierarchy of who can date whom, and how far down on the list Asian men are,” Abalos smiles. “I thought it contained enough material for a whole play.”

The result is Brown Balls, a look at stereotypes of Asian men in Western popular culture.

Its three characters – regular guys JP, Paul and Charles – even portray such archetypal figures as Fu Manchu, Bruce Lee and Charlie Chan to make a point.

“There’s a fascinating paradox for me in the image of the Asian male as a violent martial artist, yet he’s emasculated and submissive Asian wo-men, on the other hand, are hyper-sexualized.

“In Brown Balls, I put the Asian male onstage, both literally and figuratively.”

“I remember reading that the problem isn’t that stereotypes are untrue, but that they’re incomplete. I want this show to add more pieces to the puzzle, about both sexuality and masculinity.”

JP is the mastermind of the trio, “the one most angst-ridden, believing he’s not enough of what he should be.” Paul, on the other hand, “supplies comic relief by being the most okay with himself. He’s the freest to say what he wants and gives the other two permission to be as personal as he is.”

Charles is the most sensitive and socially aware.

“Biracial and gay, he’s even further on the fringe than the other two. I can’t speak for the gay experience, because it’s not mine, but it’s important that I acknowledge that it’s part of the politics in this play.”

Because the Filipino-Canadian artist uses satire and comedy to make his points, he knows some people will be offended.

“But I believe art can allow people to see the world differently. I want the audience to look beyond the surface and realize that they share common experiences with these guys.

“We’re bound by the human condition, and that’s what creates community from isolation.”

Working with the comedy troupe Asiansploitation and using comedy to tackle issues:

Do we live in a world where race is no longer an issue?: