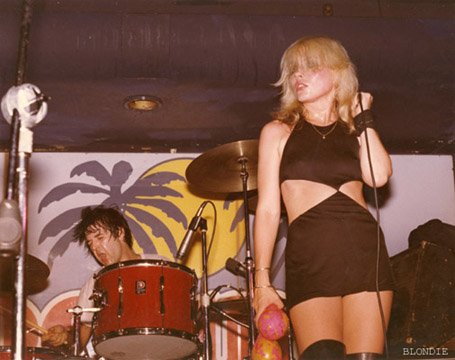 Blondie plays the El Mo during its heyday

Sam Grosso, owner of Parkdale’s rockabilly-flavoured Cadillac Lounge, has teamed up with Marco Petrucci, who owns 99 Sudbury, to purchase the El Mocambo Tavern, the historic two-storey venue at College and Spadina.

According to Grosso, current owner Abbas Jahangiri decided to sell the El Mo so that he can focus on full-time missionary work in Haiti. Jahangiri had owned the bar since 2001, and his tenure has been controversial, from renovations to the management of the El Mo message board.

“I’m a big live music fan,” says Grosso, just hours after the deal closed. “This place needed to be brought back to life, back to its heyday. We’re going to breathe some life into it, put some Cadillac style into the El Mocambo.”

First project? “We’re going to get that neon sign lit up,” he says. “Curb appeal means a lot.”

Also in the works are updates on basic amenities like good lighting, a working bar, air conditioning, heating and credit and debit machines, the introduction of a dinner menu (expect something similar to what’s on offer at the Caddy, but maybe some themed-meals to go with the music), and early shows as well as late shows, to cater to different demographics.

Grosso’s most ambitious plan is to create a “cleaner version” of the club’s glory years, especially on the second floor.

“The second floor is a major project,” he explains. “The plan is to resurrect it to what it looked like back in ‘77, with the stage in the middle, cool sightlines and two bars on each end of the venue.”

They are also applying for a patio license for the street and have plans for a rooftop patio as well. (The El Mo will be staying open through the renovations, Wednesday to Saturday and sometimes other days, so it will be a gradual progress).

As for what kind of concerts the El Mo will be hosting, Grosso doesn’t mince words about his musical preferences, mentioning in an earlier conversation that he was open to booking almost any musical style other than hip hop (rock, blues, r&b, country, folk, etc).

He explains, “the Cadillac Lounge is an extension of my personality, and it’s worked out really well for me. I feel honoured when people come up to me and tell me, “you know what? I had a really good time here, it’s a really good vibe here, I feel really comfortable.” I want to have that same thing [at the El Mo], I want the place to be comfortable.

When I think about the El Mo I think about the Rolling Stones, I think about Stevie Rae Vaughan, Elvis Costello, Muddy Waters – all these great bands that played here. I don’t think hip hop was ever born at the El Mocambo. I respect the music. All my nephews and nieces love it. Kids love it. Probably someone was saying the same thing I’m saying 60 years ago about rock’n’roll.”

Grosso is, however, open to having outside promoters organize DJ and dance nights. And if the Rolling Stones want to celebrate their 50th anniversary with a show at the El Mo, well, he’d be okay with that too.